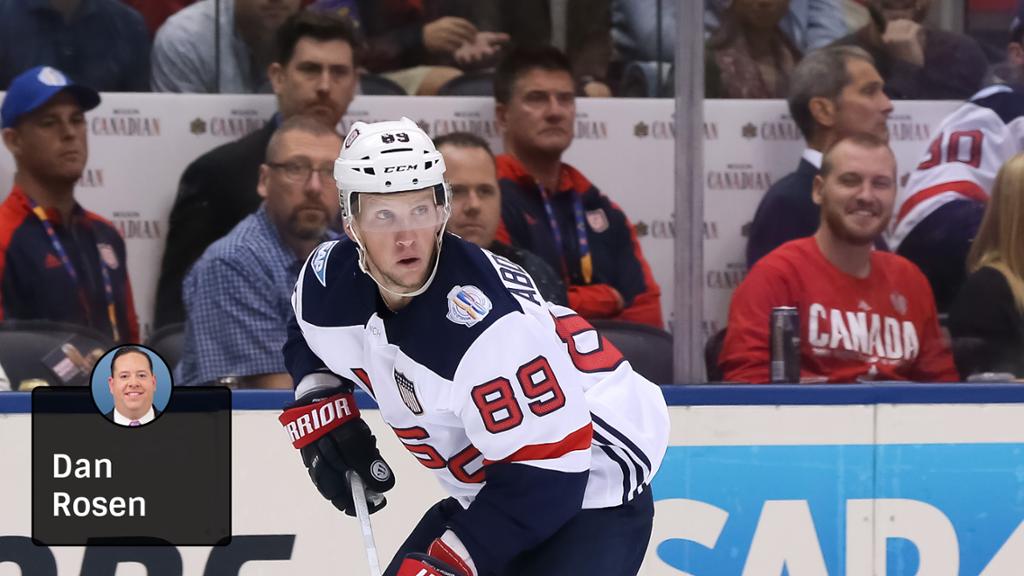 TORONTO -- Maybe Justin Abdelkader is Team USA's solution to unleashing Patrick Kane on Team Canada, to heating up the best player in the NHL last season so he can make his mark on the World Cup of Hockey 2016 in a must-win game.

So Team USA needs Kane to be a threat, a difference maker, as he typically is for the Chicago Blackhawks. Team USA coach John Tortorella appears ready to give Abdelkader a chance to help him do it.

Abdelkader has been skating on a line with Kane and center Derek Stepan in practice. That's a second line for Team USA, depending on how you want to view its depth chart. Abdelkader was in a bottom-six role, primarily on a line with Brandon Dubinsky and David Backes, for Team USA's 3-0 loss to Team Europe on Saturday.

"I think [Abdelkader] needs to be moved up in our lineup," Tortorella said. "Where he was in that maybe third-, fourth-line role, I think he's going to get a little more ice time [against Team Canada]."

Tortorella explained that he likes how Abdelkader has forechecked for Team USA, including the three pretournament games he played. He said Abdelkader has held onto the puck more than other guys.

The fact is Team USA isn't going to defeat Team Canada if it's chasing the puck. Tortorella thinks Abdelkader can be aggressive enough in his north-south game to force turnovers and get Team Canada on the run instead.

"I think he just deserves to play more," Tortorella said. "When I broke down the tape the past couple of days, it's something we need more of, having the puck more and fighting for pucks."

And so Abdelkader finds himself with Kane, because Team USA could use someone to do more of that for the Blackhawks forward in particular. It's been a struggle to find that guy.

Kane hasn't scored a goal in an international game since the 2010 Vancouver Olympics; he had no goals in six games in the 2014 Sochi Olympics. Coincidentally, Team USA didn't score in the last two games of the Sochi Olympics and was also shut out in its World Cup opener.

"That's my job on the team, to produce offense and scoring chances, try to help put goals on the board," Kane said. "It wasn't done."

To give him a chance, Kane needs to have the puck and have his linemates creating room for him to operate. That's how he can be the dangerous player who led the NHL in scoring last season with 106 points and won the Hart Trophy.

Kane is at his best when he's in control. That's when he becomes one of the most unique players in the world because of his shifty moves and incredible hands.

Tortorella is ready to give Kane ample opportunity to be Team USA's best player, or at least it's best forward, against Team Canada. In addition to playing him with Abdelkader and Stepan, Tortorella plans to use Kane in a rover role, putting him on different lines to beef up his ice time.

He did that at times against Team Europe. Kane led Team USA's forwards with 18:48 of ice time. Tortorella said he thought one of Kane's best scoring chances in the game came when he played a shift with Dubinsky and Abdelkader early in the second period. Later in that shift, he made his doozy of a turnover that led to a 2-on-0 rush finished off by Team Europe center Leon Draisaitl.

It's possible that Kane could play 20 or more minutes against Team Canada. He probably will if he's generating scoring chances instead of turning the puck over.

"This is a tough tournament to get your guys the ice time that they're used to," Tortorella said. "I've got to pick certain guys in my lineup that I'm going to find them ice time no matter what, and [Kane] is one of those guys."

It won't matter, though, if Kane doesn't get selfish and demand the puck. It might be difficult to do that on a team filled with players who are used to demanding the puck on their NHL teams, but that selfish-in-a-good-way style helps set Kane apart from other forwards in the NHL.

"I think we're a better team when Patrick Kane has the puck on his stick, that's for sure," Abdelkader said.

Which is why Stepan said he and Abdelkader have talked about how to make that happen. They've discussed getting the puck to Kane in space, ideally to get him into 1-on-1 situations where he has room to maneuver, to be creative, to do the things that make him elite.

"We're out of time," Tortorella said. "It has to happen [Tuesday] night."

Maybe Abdelkader is the right guy to help make it happen. For Team USA's sake, he better be.