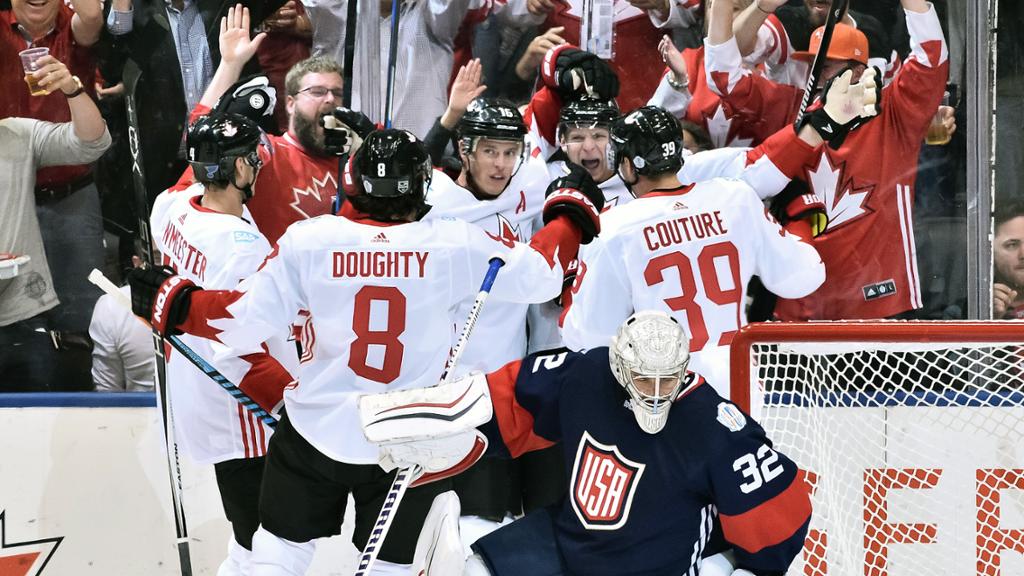 TORONTO -- Two games into the World Cup of Hockey 2016, Team Canada has clinched a spot in the semifinals and the competitive portion of Team USA's tournament is over.

Team Canada advanced to the final four by scoring four consecutive goals in a 4-2 win against Team USA at Air Canada Centre on Tuesday.

Matt Duchene scored twice, and Carey Price made 32 saves for Team Canada, which is 2-0-0 in Group A and can clinch first place with a win against Team Europe on Wednesday. Team Europe also is 2-0-0 and has clinched a semifinal berth.

"Our objective was to win [Tuesday]," Team Canada defenseman Marc-Edouard Vlasic said. "Now we're looking to [Wednesday]. We wanted to get in the semifinals. We did it. Now we want to finish first in our [group]."

Team USA is 0-2-0 and was eliminated from contention for the semifinals along with Team Czech Republic, which is 0-1-1. They close their World Cup against each other Thursday.

"It's disappointing, frustrating, all different types of emotions," Team USA coach John Tortorella said. "I think we let some people down. It's on my watch. I certainly feel responsible for that. It's really disappointing."

After Team USA defenseman Ryan McDonagh scored 4:22 into the first period for a 1-0 lead, Duchene scored 1:29 later to tie it 1-1. Corey Perry gave Team Canada a 2-1 lead 14 seconds after that when the rebound of Logan Couture's right-circle shot went into the net off Perry's pants.

Duchene then converted on a defensive-zone turnover by Team USA and beat Jonathan Quick between the pads to make it 3-1 at 12:07.

"The first couple of minutes we were tentative, we weren't playing the Canadian way and moving the puck," Perry said. "They capitalized and they got a goal and I think that kind of got us into the game and got us going."

Patrice Bergeron was credited with the goal that extended Team Canada's lead to 4-1 at 8:50 of the second period when John Tavares' centering feed hit his skate before it deflected into the net off McDonagh's right skate.

T.J. Oshie scored for Team USA with 2:32 remaining in the third period.

After Duchene tied the game at 1-1 at 5:51 of the first period, Perry scored 14 seconds later to put Team Canada ahead. Quick made a blocker save on Couture's shot from the right circle but left a rebound in front that carried into the net off Perry's pants. Team USA challenged for goaltender interference, but video review confirmed it was a good goal.

"I thought it was a good goal all the way from the start," Perry said. "I'll take it going to the net."

With Team Canada leading 3-1 and 6:13 remaining in the first period, Team USA forward Joe Pavelski swatted at a bouncing puck in the slot and Price moved to his right to get a piece of it with his right shoulder.

Unsung Moment of the Game:

Vlasic intentionally shot wide left from the left point and the carom off the end boards led to Duchene's first goal. The puck bounced to Duchene at the right side of the net and he knocked it in from there to tie the game 1-1.

"I'm a good pool player, so maybe that helped," Vlasic said. "I saw Joe [Thornton] on one side of the net and saw Duchene on the other side, so I just had to send it behind the net and it worked out."

Tavares turned around Team USA defenseman Matt Niskanen to set up Bergeron's goal. Tavares faked to the outside before cutting inside Niskanen in the left circle and throwing the puck in front to Bergeron. "It was a great job by [Bergeron] going to the net," Tavares said. "I'm glad he went there because if he didn't it wouldn't have gone in."

"It means a lot. We had a chance to knock them out of the tourney [Tuesday] and they were obviously one of the favorites coming in. We had an opportunity, we took it, and we needed to." -- Team Canada forward Matt Duchene

"It's very disappointing. Definitely not the way we envisioned it. It happens so quick in this tournament. We found ourselves chasing right away with [a 3-0 loss to Team Europe on Saturday] and put ourselves in a tough spot here against this team." -- Team USA defenseman Ryan McDonagh

McDonagh's goal ended Price's shutout streak in international play at 228:41. That dated to Canada's quarterfinal against Latvia at the 2014 Sochi Olympics. … Team USA made two lineup changes, inserting defenseman Dustin Byfuglien for Jack Johnson and forward Kyle Palmieri for Brandon Dubinsky. … Team Canada coach Mike Babcock said goalie Corey Crawford will start against Team Europe. … The winner of the game between Team Canada and Team Europe will play the second-place team from Group B in the semifinals. The loser will play the team that wins Group B.