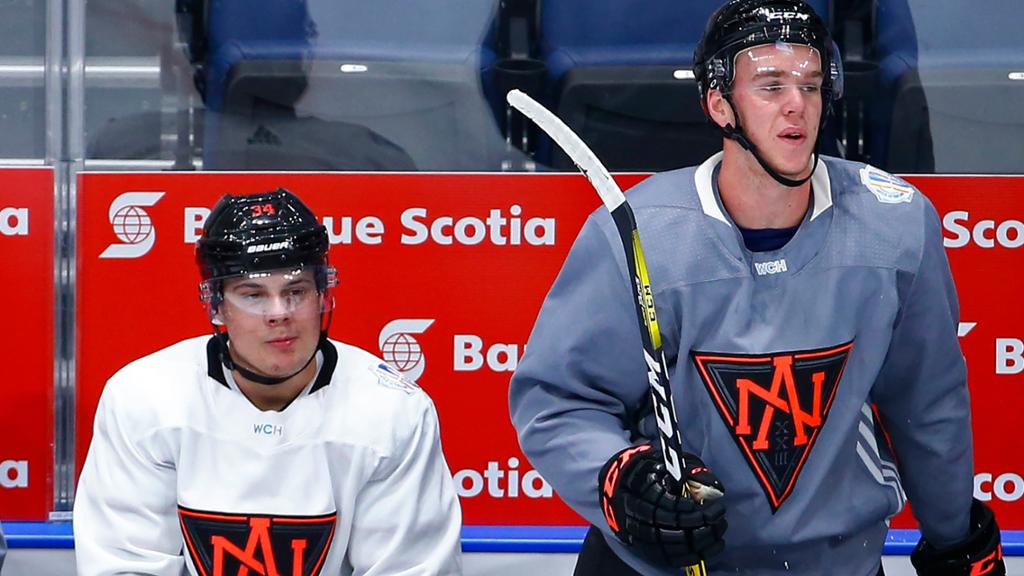 TORONTO -- After 12 days of experimentation, Team North America coach Todd McLellan has decided on linemates for captain Connor McDavid to start the World Cup of Hockey 2016.

"We're still looking for combinations that will give us the best chance to win," McLellan said. "Connor, I think, has been getting better. I thought Auston's been one of our top forwards. Those two complement each other, Auston with his size (6-foot-2, 210 pounds) and his ability to hold onto the puck, and Connor with his speed."

Matthews was the 13th forward at the start of Team North America camp. Though he has not played an NHL game, he earned his promotion, McLellan said.

"Every time he goes on the ice he seems to be able to adapt to people that are around him and complement them," McLellan said. "Auston has the ability to play the game fast, also to slow it down with his size and protect pucks and make plays. He's been one of our most responsible forwards.

"Those high-end guys have such good hockey sense and such a good mind that they have the ability to play on both sides of the puck, if they choose to do it. A lot of times, it's not choosing to do it. Auston's choosing to do it right now and doing a good job of it."

Scheifele started camp as McDavid's right wing but moved around during pretournament play.

McDavid, whose first NHL season was limited to 48 games with the Edmonton Oilers because of a fractured clavicle, is eager to get on with it.

"It's exciting," he said. "[Matthews] is a great player, otherwise he wouldn't have been picked first overall. He's proven over the last few games that he's for real and that he can help me play at this level.

McDavid was asked what he's learned about Matthews.

"I think you just learn how solid he is all over the ice," McDavid said. "He's a big body and he protects the puck well. He's got a good shot and some pretty good hands. I think he's a pretty good all-around player."

Matthews seemed pleased by the opportunity, asked Friday about playing with McDavid after plenty of experimenting.

"I like it," the Toronto Maple Leafs forward said. "Connor's a special player, so to be able to play with him and Scheifele out there, I think we can definitely do some damage.

"[McDavid] thinks the game extremely fast. He makes quick, fast decisions. It's like [Patrice] Bergeron said about [Sidney Crosby]: You give him the space and let him do his thing. For us, myself and Scheifele are two guys who can control the puck down low, and with his speed and skill and two big bodies, I think we can definitely control the puck and put teams on their heels."

The game will be Matthews' first at Air Canada Centre, the home arena of the Maple Leafs.

"Can't wait," Matthews said. "It's going to be awesome. For us, that's kind of considered home soil, especially if we're playing a team from Europe. So I think it's going to be nice, the crowd's going to be into it. We've got a lot of people behind us and we'll use it as motivation for this group."

Scheifele brings the most experience to the line, having played three NHL seasons for the Winnipeg Jets. He was as optimistic as his linemates about the combination.

"He's saving them," Scheifele said. "When the games don't matter, he doesn't need to score. We talked the first game. I hit the post and it was like, 'Ah, we're saving them.' I'm sure he's going to be fine."

Team North America, players 23 or younger from Canada and the United States, will have Jack Eichel at center on its second line with Johnny Gaudreau at left wing and Dylan Larkin at right wing.

MacKinnon missed practice Thursday because of a family matter but is expected back for practice Saturday.

"I think [the line tinkering will] continue for our team, hopefully until Oct. 2," the Oilers coach said. "We're starting to narrow things down, but all teams are going to run out of time. You have to pick your poison."