Scoring chances few and far between against Team Europe 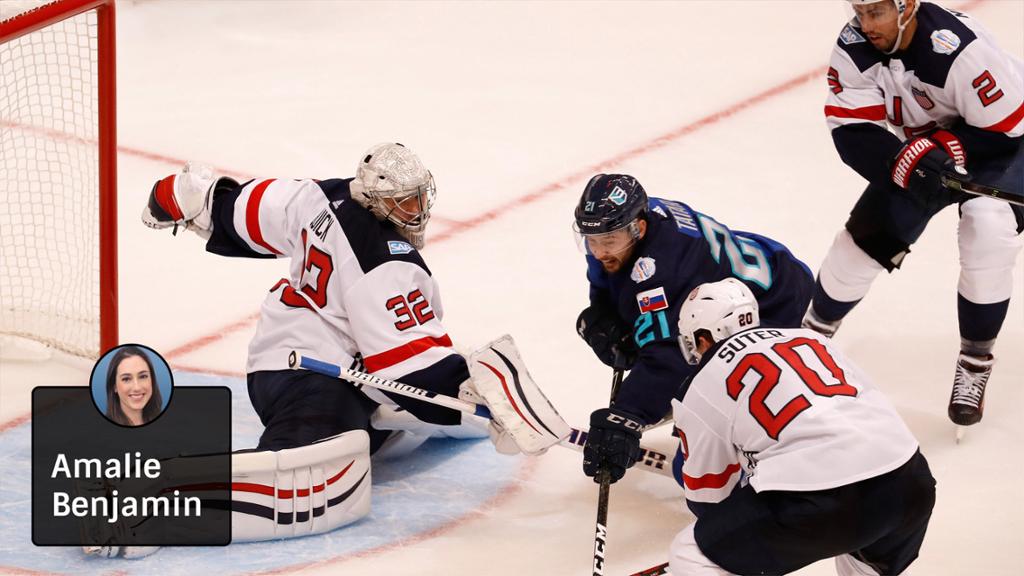 TORONTO - As they mounted, the decisions looked - to borrow from author Lewis Carroll - curiouser and curiouser. No Phil Kessel or Tyler Johnson or Justin Faulk or Kevin Shattenkirk or Kyle Okposo? A team identity built on physicality and blue collar play and grit, sometimes instead of scoring? Dustin Byfuglien (and, for that matter, 30-goal scorer Kyle Palmieri) watching Team USA's first game in a suit?

It was an interesting strategy by Team USA general manager Dean Lombardi, to fashion a squad specifically to compete with Team Canada in the World Cup of Hockey 2016, to leave off some of the offensive talent that, it turns out, it could have used against Team Europe.

Because instead of coming out and punishing a Team Europe group that looked old and slow in some games against Team North America during pretournament play, Team USA instead looked bumbling in losing, 3-0, at Air Canada Centre on Saturday.

It certainly did not look physical. It did not play to the identity that was supposed to catapult this team into reaches it has not seen of late. As Team Europe defenseman Roman Josi noted, "There were some hits out there, but it wasn't the most physical game."

Instead, Team USA missed the mark, continuing a run that has seen it go scoreless in its past three games in best-on-best tournaments, going back to the quarterfinals of the 2014 Olympics in Sochi, Russia.

Its most-recent goal scorer? Kessel. (Who, admittedly, is injured and could not help this team. But the fact remains that he was not named to the roster before the injury occurred.)

"We're trying," Team USA coach John Tortorella said of generating quality scoring chances. "And you have to give the opposing team some credit here as far as how well they defended, but I thought there were chances where another play was there, it just didn't happen. I thought our guys tried hard. The bench was good. We tried to stay together even through a little bit of adversity there. But we just couldn't create better scoring chances."

So what happened to that identity? Was it there on Saturday?

It is true that Team USA nearly scored when a puck bounced off the chest of van Riemsdyk and off the helmet of Derek Stepan and past Team Europe goaltender Jaroslav Halak. But the would-be goal, which came at 14:10 of the second period, was disallowed, something that Tortorella said he believed should not have happened.

Still, no goals? Nothing in three consecutive games? How much of a concern is that?

"No, it's a two-year gap between," Parise said. "If we get shut out every game this tournament, then we can talk about it. But we have to put it in. You look back at those games in Russia, unable to get one, and then unable to get one tonight. Yeah, we have to do a better job as forwards and as a group."

Said captain Joe Pavelski: "You go back nine periods, we don't get anything, it's frustrating. But being in there, we've had some looks along the way. It just doesn't happen because we're laying down. … But you've got to finish. The goalies are good right now, the teams are good. You've got to make your plays."

Or at least play the way you're supposed to.

Video: USA@EUR: Quick robs Tatar with a diving save

The question now is whether Team USA has the correct personnel, the correct philosophy, the correct identity to do so, to stick around in a tournament that doesn't leave much room for errors like the one made on Saturday.

Tortorella gave a rather unsatisfying answer, when asked about the decision to scratch Byfuglien, saying, "we made the decision for this game this was our best lineup. It's certainly not a negative thought on [Byfuglien], but we decided to go with this lineup tonight."

And that lineup did not score.

Sure, there is offensive talent on Team USA, enough to defeat Team Canada on Tuesday, even in a game that has suddenly become a must-win. And it's possible that this team will rebound and go on to win the World Cup, using that grit and jam and physicality, using the skills bequeathed to it by its management team and coaching staff. There's still a chance.

But it certainly would have been helpful to have a big, booming shot out there for Team USA on those second- and third-period power plays. Like, say, that of Byfuglien.