Postcards from the World Cup 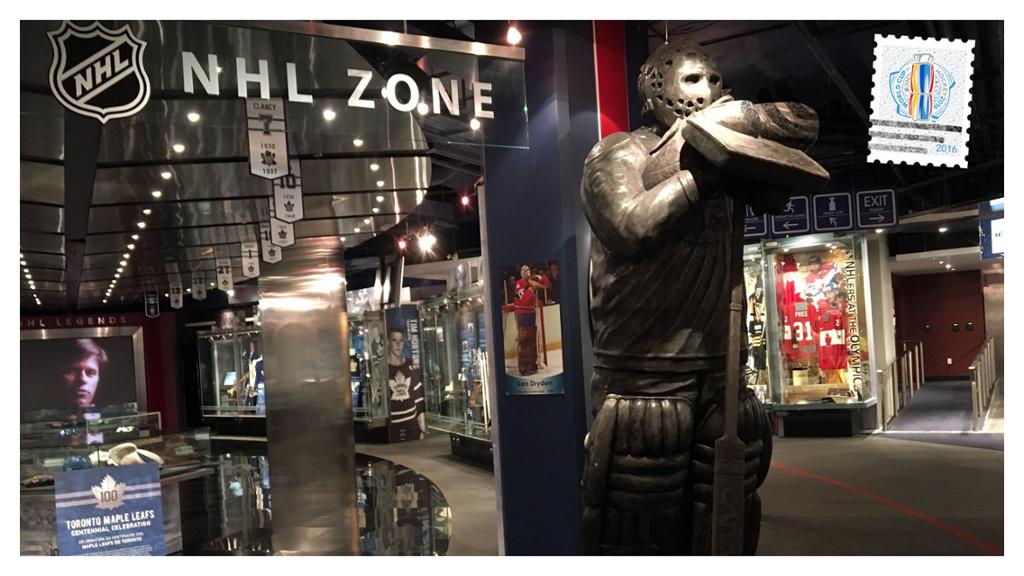 TORONTO -- The Hockey Hall of Fame takes my breath away every time I visit. But when it's so quiet you can almost hear your own quickened heartbeat, well, I'd suggest that this place for a fan would be akin to walking through the game's Pearly Gates.

I've known Phil Pritchard for some years, he being the white-gloved, perpetually happy soul who, with Hall of Fame colleague Craig Campbell, walks the Stanley Cup along a red carpet onto a rink every June for NHL Commissioner Gary Bettman's presentation to the winning captain.

The shrine is always a busy place, bustling with hockey fans who flock to the displays honoring their favorite teams and the heroes who played for them. More than six million have visited since it relocated here 23 years ago.

But in the final hours of the World Cup of Hockey 2016, I reached out to Pritchard to see about having a private hour of a hockey fan's ultimate house of worship. He flipped me the key Thursday morning, figuratively speaking, and so it was that I arrived at the Hall at 9 a.m., an hour before opening, with NHL.com Editor in Chief Bill Price.

We were met by Tyler Wolosewich, manager of guest services and public relations for the Hall of Fame, who immediately walked us up to the Esso Great Hall.

I was struck by the silence of this impressive room, it broken only by the rumbling of the subway below, the three of us surrounded by the portraits of each honored member of the shrine and many of the game's spectacular trophies.

At one end of the Hall, beneath where the manager of this long-ago bank lived, is an impregnable vault, where Lord Stanley of Preston's original 1893 cup bowl is displayed in a case. To its left, elegantly displayed, are the sterling silver bands that are removed when the current Stanley Cup's lowest band is filled and pushes up one spot on the five-band barrel.

At the other end of the Great Hall is the Stanley Cup… except this morning. But in a few minutes, a blue-uniformed man named John Ravida would climb the stairs with the trophy in his white-gloved hands. Without a word, Ravida would walk across the Great Hall, beneath its spectacular stained-glass dome ceiling, place the Cup on its pedestal base in front of a Hall of Fame logo, turn in the direction of the original cup a slap shot away, then take his exit.

Price and I caught up with him later downstairs, in the painstakingly recreated Montreal Forum dressing room of the Montreal Canadiens.

"I bring the Stanley Cup upstairs every morning that I'm here, just before we open," Ravida said. "And yes, wearing white gloves."

Tradition is king at the Hall of Fame, which is bulging at the seams with the most incredible history, the most wonderful tributes paid to the greatest games and finest players in the NHL and international and women's hockey.

Having been a hockey fan my entire life, professionally for 40 years, I can't choose a favorite exhibit, though anything related to the NHL's Original Six is dear to my heart. Growing up and still living in Montreal, the fabulous Canadiens teams of the late 1960s and late '70s are special. But as a journalist, I'm much more a fan of the best story, not any one team, and there are countless stories within these walls.

The beauty of the Hockey Hall of Fame is that it's a living, interactive museum that caters to every age group, celebrating the likes of Sidney Crosby and younger stars to the delight of some, and long-ago players for the warm reminiscences of others.

There is not a legend who doesn't get his or her due at the Hall of Fame. There are movie theatres, 3D film screenings, games, recordings and wonderful memorabilia items that many of us cherished until our mothers threw them out.

"It was getting mildewed," many dismayed kids heard.

The Hall features jerseys and artifacts from around the world, and it recalls the landmark series, great single games and the accomplishments of the timeless legends.

But what it truly celebrates is the lifestyle of hockey, something that is in the DNA of Canadians, and a huge part of millions of others in the United States and worldwide.

To Pritchard, known to many as the "Keeper of the Cup," Price and I offer our profound thanks for having given us the keys to the hockey kingdom Thursday. Visitors were arriving as we headed out, after we'd spent a reverential hour alone with some of the greatest names and moments in the game.

"There is always room to add another item," Pritchard said, "always space to share more of hockey's rich history." Contact him by email at ppritchard@hhof.com before your mother starts thinking about mildew.

And if you can't make it to the Hall of Fame in person, visit this wonderful museum online at www.hhof.com.