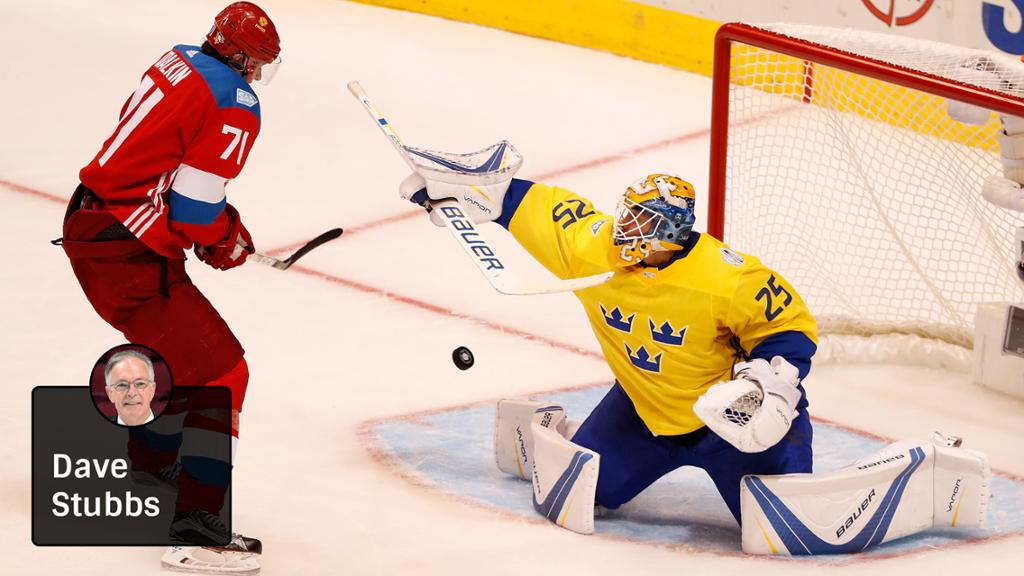 TORONTO -- If Jacob Markstrom's head was a little in the clouds, having just backstopped Team Sweden to an exciting 2-1 victory against Team Russia on Sunday, the goaltender's feet were nailed to the ground.

"It's one game, guys," he said with a laugh, nearing the end of a lengthy postgame interview session at Air Canada Centre. "I want to be a lot better than I am right now."

There was little to nitpick about Markstrom's performance in this World Cup of Hockey 2016 opener for Team Sweden and Team Russia.

And there was a great deal that impressed about the 27-save effort that came with virtually no advance notice, the call to action coming from coach Rikard Gronborg at nearly the last minute.

When No. 1 goaltender Henrik Lundqvist arrived at the arena a few hours before game time feeling under the weather, returning to the team's hotel too sick to play, Team Sweden turned to Markstrom.

"I hadn't expected it," he said. "But nothing in my preparation was different. It's always the same."

Markstrom knows a thing or two about being ready when called upon, the backup to Ryan Miller with the NHL's Vancouver Canucks.

And he's acquitted himself well on the international stage, named the top goaltender at the 2009 IIHF World Junior Championship in Ottawa.

That doesn't mean that Team Sweden's net didn't triple in size in the pregame eyes of Team Russia when the latter learned that Lundqvist wouldn't dress.

But in Team Sweden's dressing room, there was only a cool confidence in the 26-year-old who would face the firepower of Alex Ovechkin, Evgeni Malkin and the rest of a Team Russia lineup that has the potential to burn out the goal light.

"We found out right when we got to the rink, at our first team meeting," said Team Sweden forward Gabriel Landeskog, who opened the day's scoring by winding up pretty much to Stockholm for his lasered power-play one-timer. "Obviously, it's unfortunate (losing Lundqvist). He's our starting goaltender and a big part of our team. We hope he's doing well and we hope he's all right.

"But we knew [Markstrom] was going to have a great game. We knew he's a great goaltender. He's a really calm guy who spreads his energy throughout the dressing room and the lineup out on the ice, so we had no worries. We believed in him. Really, we were just taking care of business. Everybody kept focusing on the game as usual. There was no panic in the dressing room."

Markstrom certainly gave his teammates no reason for sweaty palms. The goaltender was especially sharp in the second period, turning aside shots by Vladimir Tarasenko, Nikolay Kulemin and Malkin to help preserve Team Sweden's 1-0 lead after 40 minutes, then came up with a few more vital saves in the third.

According to Gronborg and Landeskog, Team Sweden did nothing to change its game plan with Markstrom in as emergency relief.

"The start of the game, the first five minutes, we just wanted to focus on short shifts, getting the puck in deep, managing the puck, really, and not give up any big scoring chances," Landeskog said. "I thought we did that. That translated into the whole first period."

It might take a few tumbles in the washer for Team Sweden's equipment staff to clean Markstrom's jersey. Added to the three-crown Tre Kronor crest were at least a half-dozen smudges from vulcanized rubber, Team Russia shooters burying pucks in the goalie's chest and stomach.

That speaks to Markstrom's solid positioning, being square to shooters, not needing to scramble madly to make saves.

"I felt like I saw the puck," he said. "The defense did a great job boxing out and blocking shots. The forwards too. And if you can see the puck, it's a lot easier."

Indeed, Markstrom was 33 seconds from earning a shutout, which would have been the third in as many World Cup games to that point, when Ovechkin somehow threaded a long shot through a forest of legs with goalie Sergei Bobrovsky pulled for a sixth skater.

Ovechkin appeared to have tied the game with 8.2 seconds remaining, but the apparent goal was called back, ruled to have been gloved into the net.

"You just have to wait," Markstrom said of the video-review process. "You have to stay focused. You can't lose your mind. If it had counted, we had [eight] seconds left, then to play overtime, probably.

"I was crossing my fingers and toes that it wouldn't count. We got a little lucky there too, but I think we deserved it. Over 60 minutes we were the better team, and we had a great game-plan and every player executed."

The elephant in the room afterward was Gronborg's choice for goaltender on Tuesday against Team Finland (3 p.m. ET; ESPN, SN, TVA Sports). Should Lundqvist be healthy, does his coach put him in nets, or does he choose to ride the hot hand and come back with Markstrom, parking Lundqvist on the bench as the backup?

"Right now, I haven't put any thought in it," Gronborg said. "I'm just happy that we won this game. That was the most important thing, whoever plays in the net. We've got to obviously go back [Monday] and reassess where we're at - not just the goaltending situation, but with the whole team, see where we're at with injuries and being sick and all that stuff. Right now, I have really no good answer for you."

Enjoying the glow of his masterful afternoon's work, Markstrom grinned and shrugged as his coach's words were read back to him.

"Obviously I want to play Tuesday, but Lundqvist is one of the best goalies in the world, so …" he said, the sentence unfinished.

That game also will be an afternoon faceoff, not the favorite for those players who are creatures of habit and prefer the morning skate, a light meal, a nap and the game.

"I mean, I like hockey," Markstrom said, saying with a laugh that he had no preference. "I just like to play games."