No answers, excuses for Team USA 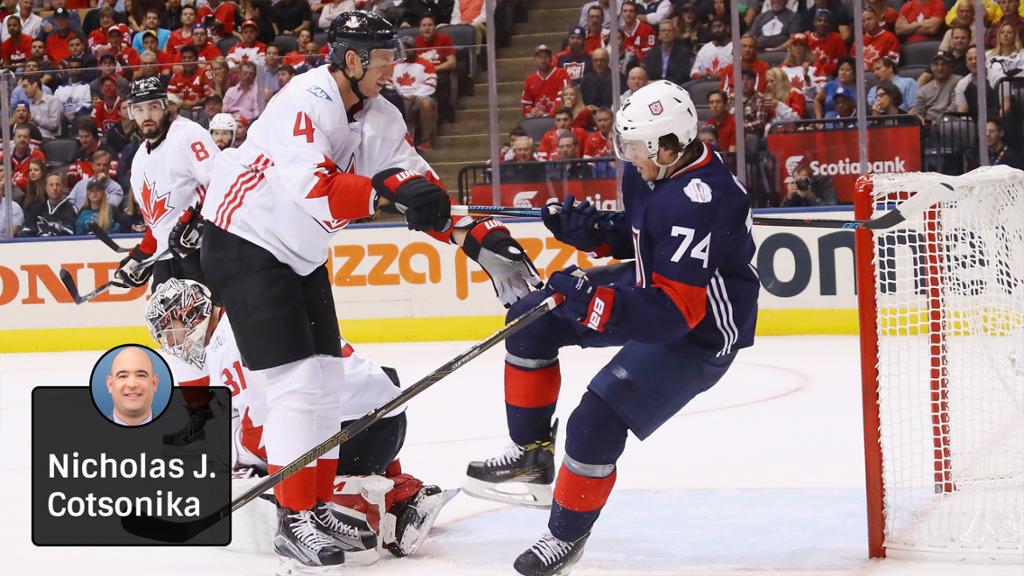 TORONTO -- Total failure. Plain and simple. Team USA came to defeat Team Canada and win the World Cup of Hockey 2016 with a hard-to-play-against, in-your-face identity. Four days and two games into the preliminary round, it's over.

Team USA was eliminated with a 4-2 loss to Team Canada on Tuesday after a 3-0 loss to Team Europe on Saturday. It still has to play Team Czech Republic on Thursday (8 p.m ET; ESPN2, SN, TVA Sports), but all that is left is to show some pride and avoid a meltdown like the United States' 5-0 loss to Finland in the bronze-medal game of the 2014 Sochi Olympics.

"I feel like we let our country down, we let ourselves down," defenseman Ryan Suter said. "It's just disappointing."

The trend is decidedly downward: The United States took Canada to overtime of the gold-medal game at the 2010 Vancouver Olympics. It lost to Canada 1-0 in the semifinals in Sochi in a game that wasn't as close as the score. Now this.

"It's definitely frustrating being an American and having these opportunities and having nothing to show for it," forward Patrick Kane said.

Video: Team USA speaks to the media after 4-2 loss

USA Hockey has a bright future with up-and-coming players like Auston Matthews, Jack Eichel and Johnny Gaudreau, who are playing in this tournament for Team North America, comprised of players 23 and younger from Canada and the United States. If NHL players participate in the 2018 Olympics, the United States could look a lot different.

But first, hard questions need to be asked about how Team USA was built, how it was coached, how it performed and how it can learn from it.

To be fair, the format of the World Cup was a factor. The NHL and the NHL Players' Association created Team North America and Team Europe, comprised of European players from outside the Czech Republic, Finland, Russia and Sweden, to strengthen the field and include more of the best players. That meant Team USA could not use some of its best young players if it wanted them and had to open against Team Europe instead of a weaker national team.

Regardless, Team USA general manager Dean Lombardi chose grit over skill in building the roster. He figured a more skilled lineup failed to defeat Canada on the larger international ice sheet in Sochi, so the best chance was not to try to beat Team Canada at its own game, especially on the smaller NHL-sized ice sheet in Toronto. Instead of players like Phil Kessel, Tyler Johnson and Kevin Shattenkirk, he selected players like Justin Abdelkader, Brandon Dubinsky and Jack Johnson.

Coach John Tortorella talked about playing straight ahead, moving the puck quickly up the ice, getting in on the forecheck and getting to the net. Team USA simply didn't do that against Team Europe. It did it in the beginning against Team Canada, taking a 1-0 lead, but Team Canada quickly responded, took a 4-1 lead and made Team USA chase the game again. So after committing to a certain style, Team USA didn't even play it, and in a short tournament, it had little margin for error.

In hindsight, should Team USA have gone with a different roster?

So what was the problem then?

"We didn't play well enough," Tortorella said. "You guys can beat up the roster all you want. You look at some of those players on our roster, there's some pretty good skill players and we just simply did not do enough offensively and we self-inflicted quite a bit in two games. We gave up some easy goals, and you just can't do that in a short tournament."

Video: CAN@USA: Oshie gets credit for bad-angle goal in 3rd

There is a lot of truth to that. This team still had the reigning winner of the Hart Trophy as the NHL's most valuable player: Kane. It still had three of the top eight scorers in the NHL last season: Kane, Joe Pavelski and Blake Wheeler. It still had 10 forwards who scored at least 21 goals last season. Players who were supposed to be leaders made key turnovers that led to goals, like Kane, Ryan McDonagh and Max Pacioretty. Goaltender Jonathan Quick did not bail them out. The roster is not an excuse for this team to be outscored 7-2 in two games.

"It doesn't matter who was here or who wasn't," Pavelski said. "It was a job for us to get it done, and we're not getting it [done]. There's a lot of disappointment. You just want so much better for each other, and you want to step up and play better and just add more to the game. We were never able to do that."

But Tortorella also shuffled his lines and power-play units constantly. He also scratched forward Kyle Palmieri, a 30-goal scorer last season, and defenseman Dustin Byfuglien, the top-scoring American defenseman last season, against Team Europe in what ended up as a shutout loss. He put Palmieri and Byfuglien back in the lineup against Team Canada and scratched two players who were supposed to be on the roster to defeat Team Canada: Dubinsky and Johnson. He also started with Quick and stuck with him instead of going with Ben Bishop or Cory Schneider.

"It's disappointing, frustrating, all different types of emotions," Tortorella said. "I think we let some people down. It's on my watch. I certainly feel responsible for that."

Time for USA Hockey to reassess everything.

"To come here and flop like we did is extremely disappointing," Suter said. "Obviously we have to examine ourselves and what more we could have done and how we can get better for future tournaments."