Leaves World Cup without a win in three preliminary-round games 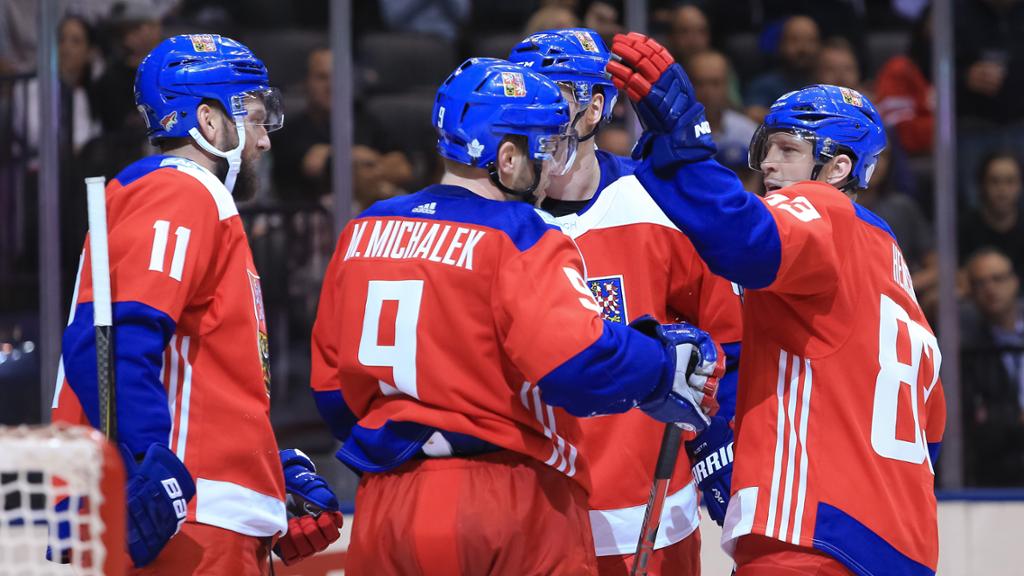 TORONTO -- Team USA is leaving the World Cup of Hockey 2016 without a victory after losing to Team Czech Republic 4-3 in the final preliminary-round game at Air Canada Centre on Thursday.

"None of us with the U.S. team here from head to toe is happy with what's happened here," Team USA coach John Tortorella said. "But I thought our guys rallied together here a little bit, and that's what we talked about, as far as all the things going around the team and the organization of USA Hockey, let's just try to play a game for ourselves.

"We come up short, but I think some guys gave some really true efforts. We just didn't find a way to win the hockey game."

Joe Pavelski, Justin Abdelkader and Ryan McDonagh scored, and Ben Bishop made 16 saves on 20 shots for Team USA before being replaced to start the third period by Cory Schneider, who made seven saves.

"It's important any time you wear your jersey," Abdelkader said. "Putting on the USA sweater, there's a lot of pride in it. I think this [loss] kind of exemplified the way we played the tournament. We just had too many mistakes and they were magnified, teams took advantage of them. There are good players in this tournament, it's best on best, so they're going to make you pay."

Milan Michalek said he believed it was the first time he and his brother scored in the same game for the same team.

"It's special to do it in the World Cup and with our parents here, it's nice," he said. "It's always special to play for the national team when we're playing together."

Sustr scored at 16:50 when his shot from the side found a hole between Bishop and the post. Michalek scored his second goal at 17:29 when Ales Hemsky set him up for a one-timer in the slot.

Team USA pulled within 4-3 at 2:22 of the third period on McDonagh's second goal of the tournament, fighting off Jakub Voracek to convert a feed from Blake Wheeler while shorthanded.

Team USA buzzed the Team Czech Republic zone for most of the remainder of the third period, including a power play with 2:11 to play, but could not tie the game.

Milan Michalek got credit for Team Czech Republic's second goal when Team USA defenseman Ryan Suter swept a loose puck in the crease into his net at 6:03 of the second period. Abdelkader tied the game 2-2 at 14:13 of the second, one-timing a Dustin Byfuglien pass past Mrazek.

Hemsky skated down the right wing and found Milan Michalek skating into the high slot with a perfect pass. Michalek put his shot in the top corner past Bishop's extended glove to score what turned out to be the game-winning goal.

At 5:06 of the third period, Kane corralled a puck off the end boards, spun on a Team Czech Republic defender, and shot toward an empty net. Mrazek got across from the other side of the crease and met the puck near the goal line with his pad, maintaining the 4-3 lead.

Team Czech Republic's penalty killers allowed two shots on Mrazek during a power play that began with 2:11 to go in the third period. Team USA pulled goaltender Cory Schneider for an extra attacker halfway through the power play, but Team Czech Republic did not allow it to score the tying goal.

Byfuglien skated down the left wing before stopping suddenly to shake a defender and create a passing lane. He immediately saw Abdelkader alone on the far side of the net and set him up for a one-timer that beat Mrazek and tied the game.

"It was a great pass," Abdelkader said. "[Byfuglien's] got great vision, he's played forward in [the NHL] a little bit, and you can see why, because when he gets in the rush he can make plays."

"If you look at [this win] from a hockey perspective in the Czech Republic, it has a huge meaning because you go out and prove to people there that you can play. Even though the talent on the team or the talent that we have in the NHL or all over the world in the leagues is not as deep as we used to have, you still can come out with a great effort. I think the biggest thing we can take out of this is how much passion and … heart that we put out tonight." -- Team Czech Republic assistant coach Vinny Prospal

Each team scored more goals in this game than it did in its previous two games combined. Team USA and Team Czech Republic each scored two goals in its first two games. … Kane played 23:15, second only to defenseman John Carlson, and had a game-high seven shots on goal. Tortorella said he though Kane and Derek Stepan were Team USA's best players.