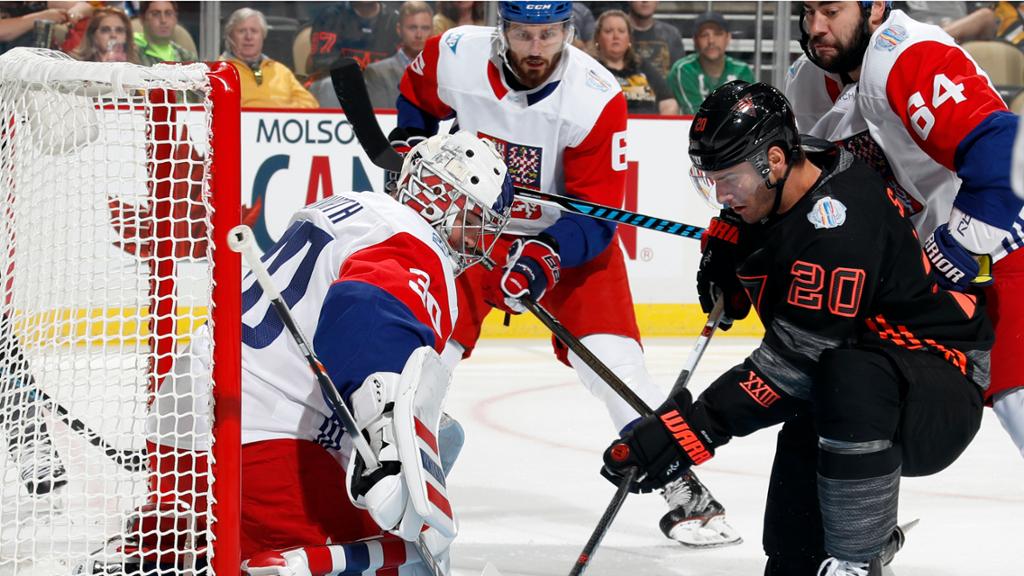 After Team North America forward Auston Matthews tied it 2-2 with 9:03 remaining, Plekanec scored the game-winner 53 seconds later. The goal was Plekanec's third of the World Cup of Hockey 2016 pretournament.

Team Czech Republic had a 2-0 lead until defenseman Shayne Gostisbehere cut it in half on a slap shot 8:58 into the third.

Team Czech Republic goalie Michal Neuvirth, starting for the second time in three pretournament games, made 25 saves before goalie Petr Mrazek replaced him with 9:45 remaining in the second period.

Video: CZE@NAT: Neuvirth sticks out his pad to rob Saad

Neuvirth allowed one goal on 46 shots in his two pretournament starts to make his case to be the No. 1 goalie for Team Czech Republic when it plays its first game of the World Cup against Team Canada at Air Canada Centre on Saturday.

"In my mind, it's going to be really hard on us in the next couple of days," Prospal said. "We don't really have any more games, any more exhibition games. We're going to be starting on Saturday against a really good hockey team and we better choose the right guy."

Forward Ondrej Palat gave Team Czech Republic a 1-0 lead on its first power play after Ales Hemsky found him alone between the faceoff circles. Palat shot off of Team North America defenseman Morgan Rielly's stick and the puck fluttered over goalie Matt Murray with 9:52 remaining in the first period.

Most of the first period was spent in Team Czech Republic's end, resulting in pressure on Neuvirth, who made several impressive saves to maintain the one-goal lead. Team North America outshot Team Czech Republic 16-7 in the first. With 2:28 left in the period, Neuvirth stopped Team North America's final quality chance of the first by hugging the post to deny Matthews' short-side shot.

Murray didn't face much action but made a few key saves to keep Team North America within a goal. In two starts, he allowed one goal on 40 shots.

Murray made 16 saves Wednesday before being replaced to start the third period by Connor Hellebuyck, who made 10 saves on 12 shots.

"He's been really good," McLellan said. "I'm not prepared to anoint him yet. We have to sit down and evaluate the game. ... We need to respect the process and the others involved."

Goal of the game: Shortly after Matthews scored with 9:03 remaining to erase what was once a two-goal lead for Team Czech Republic, Plekanec answered with the game-winning goal. Plekanec shuffled the puck behind the net before Hemsky corralled it and sent a pass back to Plekanec near the right post. Plekanec redirected the pass to sneak it by Hellebuyck with 8:10 left.

Save of the game: With 6:12 remaining in the second period, Team North America forward Johnny Gaudreau charged toward Mrazek on a partial breakaway. Mrazek turned away Gaudreau's backhand shot from in front of the crease before denying him again a few seconds later for his first two saves.

Highlight moment of the game: Shortly after the puck was dropped to begin the second period, Team Czech Republic barged into Team North America's zone and created havoc around Murray. After stopping one shot, Murray fell to his stomach while the puck bounced throughout the zone. Team Czech Republic forward Milan Michalek charged into the crease, attempting to jam the puck in, but flipped over a few players in front before the puck was cleared, leaving Team North America down one goal.

"They're a good team, a fast team. The only way to slow them down is if you make them pay the price." - Team Czech Republic assistant coach Vinny Prospal on being physical against Team North America

"I think, as a team, this was a wake-up call for us. Those first two games, I think we might have had it a little too easy. Today, we were kind of forced to play more of a man's game, and I think it was a good challenge for us heading into the tournament." - Team North America forward Auston Matthews on facing a physical challenge

"We won two of three games and we showed some really positive things and we still have some things to work on if we want to be successful. I thought overall we can be very happy with the camp, the practices and the games." - Team Czech Republic forward Tomas Plekanec

Need to know: Team Czech Republic forward Vladimir Sobotka did not play after saying Tuesday he felt fully recovered from an injured shoulder sustained Sept. 8 against Team Russia. Sobotka was one of four Team Czech Republic players to participate in a morning skate at Consol Energy Center.