Tatar scores in OT to lift Team Europe into final 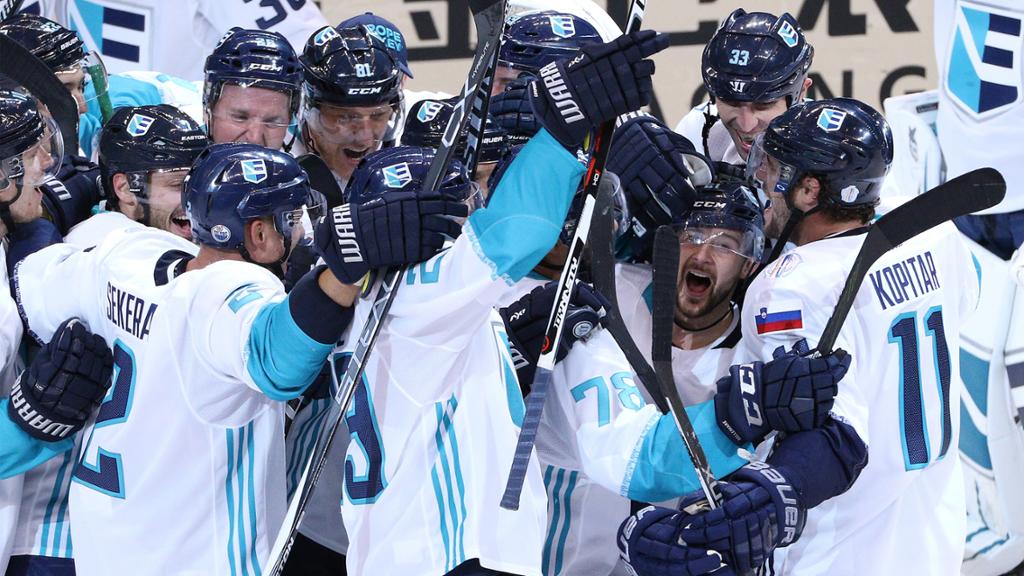 TORONTO -- Team Europe wasn't ready for its surprising run at the World Cup of Hockey 2016 to end.

Tomas Tatar scored 3:43 into overtime to give Team Europe a 3-2 semifinal victory against Team Sweden at Air Canada Centre on Sunday, securing a spot in the best-of-3 final against Team Canada, which begins on Tuesday (8 p.m. ET; ESPN, CBC, TVA Sports).

"One of the best tournaments in the world, best players from the NHL in one spot and we have a chance to play in the final, which is great," Tatar said. "The story continues."

After Team Sweden goaltender Henrik Lundqvist made a left pad save on Tatar's initial shot the rebound caromed into the net off Tatar's left skate. It was Tatar's second goal of the game after he had no points in three preliminary-round games.

"I was hoping I'm going to get an opportunity to sway one game and I'm lucky it happened today," Tatar said.

Video: EUR@SWE: Tatar flips home own rebound for a 2-1 lead

Although few expected Team Europe, an amalgamation of players not from Sweden, Finland, the Czech Republic or Russia, to get this far, Team Sweden had aspirations of reaching the final and getting a chance to avenge a loss to Canada in the gold medal game at the 2014 Sochi Olympics.

"We all wanted to play in the finals against Canada," Team Sweden left wing Daniel Sedin said. "That was our goal and today's effort wasn't enough," "We played a patient game and they were the ones who scored."

Team Sweden took the lead 2:31 into the second period when Nicklas Backstrom went to the net to put in an Anton Stralman rebound. Marian Gaborik pulled Team Europe even at 1-1 with 3:33 left in the second by finishing a centering feed from defenseman Christian Ehrhoff.

Tatar backhanded home his own rebound 12 seconds into the third period to put Team Europe ahead 2-1. Erik Karlsson scored the goal that forced overtime when his right point shot appeared to deflect off Team Europe defenseman Roman Josi before floating in past goaltender Jarolsav Halak with 4:32 remaining in regulation.

Video: EUR@SWE: Karlsson evens the game late from the point

After Lundqvist failed to stop the puck when Anze Kopitar threw it behind the net, Team Europe forward Mats Zuccarello tracked it down long the left wing boards and fed Tatar, who was driving to the right post. Lundqvist made a left pad save on Tatar's initial shot, but the rebound deflected into the net off Tatar's left skate. A video review by officials in the NHL Situation Room confirmed that the goal was legal because Tatar did not make a distinct kicking motion with his foot. "It's always stressful when there's a review," Tatar said. "You never know which way it's going to go. I knew I didn't do a kicking motion, so I was hoping they were going to see it on the replay."

Backstrom had a chance to win the game for Team Sweden on a 2-on-1 rush 3:17 into overtime, but Halak made a right pad save on his wrist shot from the right circle. Tatar scored the winning goal 26 seconds later. "I was trying to shoot low blocker, but he made a good save and unfortunately they won it after that," Backstrom said. "That's hockey."

Unsung moment of the Game:

Clinging to a 2-1 lead, Team Europe had to kill off a hooking penalty by Zuccarello 4:14 into the third period. It got two saves from Halak and blocked shots from Kopitar and Andrej Sekera to survive the two minutes.

Team Europe came close to going up by two goals 9:31 into the third period when Tomas Vanek's breakaway shot went off Lundqvist's right pad and was headed for the goal line. Stralman raced back in time to clear the puck away before it went in.

Video: EUR@SWE: Stralman prevents a goal in the 3rd

"We are happy where we are and definitely pleased. I think nobody would guess we could be in the final. It was 33-to-1 odds against us. So it just feels good to be where we're at. I think everybody here is really happy." -- Team Europe right wing Marian Hossa

"It's important we don't get giddy. We want to give Canada and the world a really good final." --Team Europe coach Ralph Krueger

"Everything other than a gold medal is a failure in our eyes, and I think that's what everybody in our dressing room believes. We had one goal in mind and we didn't manage to accomplish that. This one definitely stings." -- Team Sweden left wing Gabriel Landeskog

Puck time spent in offensive zone on power play: 37% for Team Europe and 54% for Team Sweden

Team Sweden: Finishes the tournament with consecutive overtime losses and falls one win short of reaching the final.

Team Europe: Advances to the best-of-3 final against Team Canada, beginning on Tuesday.