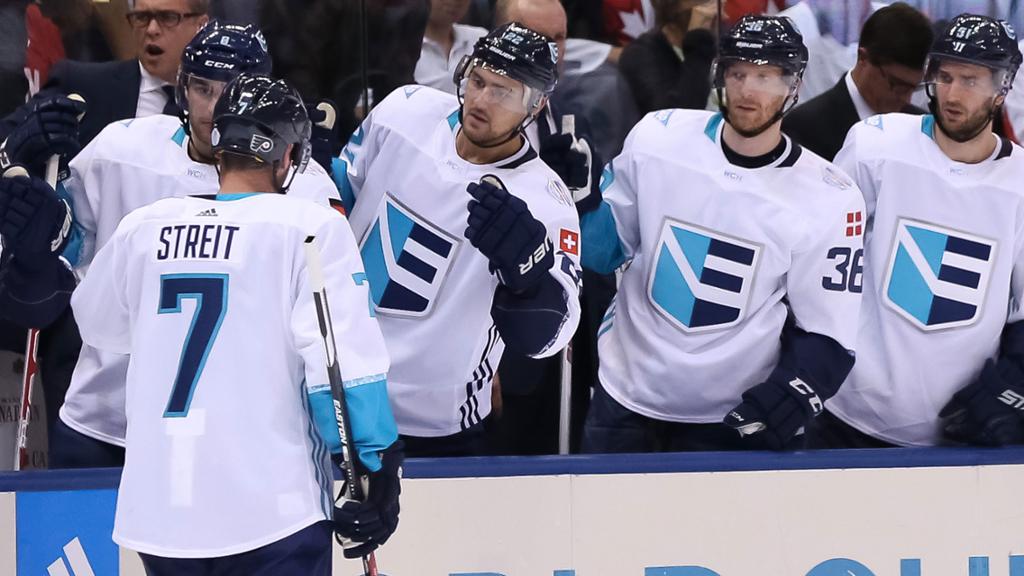 TORONTO -- A 4-1 loss to Team Canada at Air Canada Centre on Wednesday sent Team Europe to familiar territory for its semifinal game at the World Cup of Hockey 2016.

Team Europe (2-1-0) will play Team Sweden (2-0-1), the first-place team in Group B, either Saturday or Sunday. They played against each other at Verizon Center on Sept. 14 in the pretournament finale, and a 6-2 win by Team Europe sent it into the World Cup on a high.

"We can definitely take courage from our game in Washington," Team Europe coach Ralph Krueger said. "We know that they had just come from Europe and they're a much-improved team right now.

"I thought they reacted well in a difficult situation and a difficult start today [a 4-3 overtime loss against Team North America]. I know them inside-out also, so many games against them, as do most of our players.

"It's a Euro-Euro battle, and we definitely feel confident going into it. We know it'll be a stronger team than we saw in Washington for sure, but I know we're a better team and more knowledgeable of what we're capable of and [how] we need to play than we were then too. So it should be a great game."

Team Europe, a collection of players from eight different countries not Russia, Sweden, Finland or Czech Republic, needed some time to get its game together, blown out twice earlier in pretournament play by Team North America.

Though it was a springboard, the win against Team Sweden in Washington is in the rearview mirror and won't be much of a factor in the semifinals, Team Europe defenseman Roman Josi said.

"They really stepped it up in the tournament," Josi said. "They probably didn't have their best game against us. We played pretty well in that pretournament game. It's going to be a different game."

In the battle for top spot in Group A, Team Canada did not leave Team Europe much of an opening with the only two goals of the first period.

Hossa scored early in the second period from a bad angle to cut the deficit to 2-1, but Team Europe didn't have much pushback after that and was out-shot by Team Canada 46-20.

"We definitely saw the level that it'll take to win this tournament tonight," Krueger said. "We weren't pleased as a group with our first period. We kind of watched the game and came back better in the second. It was a much stronger period, but we had too many shorthanded situations and not enough shots getting through from our offense that we did create. I thought Canada did an amazing job of getting in the lanes and taking away any opportunities we had.

"The four teams that are in it have a chance to win it, but the favorite remains Canada and there's nothing else to say."

In the other semifinal, Team Canada will play the second-place team from Group B, still to be decided between Team North America and Team Russia.

Team Europe didn't waver from its belief that it's the tournament underdog after the loss to Team Canada on Wednesday.

"Underdogs and surprises happen in [a] tournament," Hossa said. "Nobody believed this group, especially after the first two games against the young guys. They crushed us. Nobody gave us a chance to win a game. Now here we are, top four teams."

In his postgame interview, Krueger corrected a questioner who said Team Europe was an afterthought for 99 percent of people who looked at the World Cup groups before the games started.

And he did see positives for the practice days ahead of the semifinals this weekend.

"There's a lot of growth in this game for us," Krueger said. "We're where we wanted to be at this point, we're in the semifinal, and that won't dampen spirits. If anything, it'll make us hungrier in the next three days to find one more level with this group.

"We've had adversity before and come out of it really strong, and I'm sure we will this time."