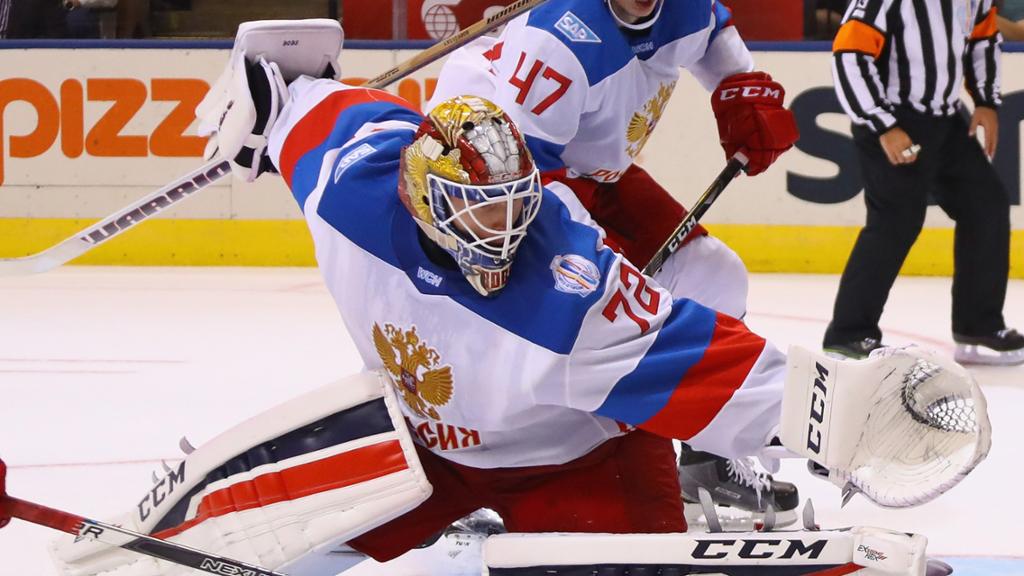 TORONTO -- Team Russia's offense woke up in a big way, scoring four goals in a span of 6:14 in the second period and held off a late charge from Team North America to win the Group B showdown 4-3 at the World Cup of Hockey 2016 at Air Canada Centre on Monday.

Following a 2-1 loss to Team Sweden on Sunday, Team Russia captain Alex Ovechkin knew he and his teammates were playing for their tournament lives.

"Obviously we knew we can't lose the game," Ovechkin said. "If we lose the game we're obviously out of the tournament. Back-to-back, I think we played a solid second [period] and our penalty-kill guys, [Ivan] Telegin, blocked the shots, [Sergei] Bobrovsky.

"You can see everybody sacrificing, and we get the result."

Video: RUS@NAT: Tarasenko spins and scores through a screen

"We did it," Kuznetsov said. "We won the game. We feel like a family."

Murray said he jammed his thumb midway through the second period, but added the injury did not impact his ability to play. Instead, he blamed the Team Russia flurry of goals on his team loosening up the game.

Video: RUS@NAT: Bobrovsky keeps the puck out to seal 4-3 win

"I think for the most part, we didn't want to turn it into a track meet and we did that for about 10 minutes and it cost us the game probably," he said. "I thought we played a very good game and we were all over them for the third period and most of the first. As soon as we opened it up and allowed them to use their speed, that's where you saw them kind of take over the game."

Team North America picked up where it left off in its 4-1 tournament-opening win against Team Finland, coming at Team Russia in waves and backing its defenders off with speed early in the game.

It paid dividends at 5:14 of the first period when Matthews, a Toronto Maple Leafs prospect, scored his first goal at Air Canada Centre one night after getting his first point in his future home rink.

The second period was a different story.

After scoring one goal in its first 89:29 of the tournament, Team Russia unleashed a flurry of four goals in six minutes to take a 4-1 lead.

Namestnikov got it started at 9:29, putting a rebound off the post, off Murray's right skate and into the net, followed by Kucherov's goal at 10:19 that gave Team Russia a 2-1 lead.

Kuznetsov made it 3-1 at 13:37, making a nifty move to his forehand on Rielly, and Tarasenko made it 4-1 at 15:43 on a turnaround wrist shot past a Datsyuk screen to chase Murray from the game.

Rielly got the comeback going for Team North America at 17:56 of the second, beating Bobrovsky with a wrist shot inside the far post. Nugent-Hopkins cut the Team Russia lead to 4-3 at 4:01 of the third, but Team North America would get no closer.

Team North America had a 5-on-3 power play chance for 1:34 midway through the third and had a 6-on-4 power play in the final minute, but could not tie the game.

Team North America defenseman Colton Parayko had the hardest shot (99 mph) of the game, but missed the net.

Just after the five-minute mark of the first period, McDavid raced down the wing with the puck, shedding Datsyuk on the boards along the way, and setting up Matthews with a tap-in goal.

Save of the game

Moments after Team Russia squandered back-to-back power-play opportunities without generating a shot on goal, McDavid had a chance to put Team North America up 2-0 at 5:23 of the second period when he broke in alone and deked backhand to forehand, but was denied by Bobrovsky's right pad.

"We were desperate tonight," Bobrovsky said, "so every moment, every shot, I was focused and that was the most important shot of my life."

Video: RUS@NAT: Bobrovsky turns McDavid aside in the 2nd

Clinging to a 4-3 lead with less than nine minutes left, Team Russia forwards Artemi Panarin and Artem Anisimov took penalties 26 seconds apart. Team North America coach Todd McLellan sent out McDavid, Matthews, Mark Scheifele, Jack Eichel and Shayne Gostisbehere to try and get the tying goal. After buzzing around the zone for a minute, Matthews drove the puck hard to the net and created a scramble in the crease. With the puck loose and Bobrovsky out of position, Team Russia defenseman Nikita Zaitsev found it and swept the puck down the ice, ending the threat.

"That 5-on-3 late in the game, that's when we need to be able to do something," McDavid said. "We definitely let the team down there."

At 13:37 of the second period, Kuznetsov carried the puck down the right wing, slipped it under Rielly's stick and sent a quick wrist shot that appeared to surprise Murray to make it 3-1 for Team Russia. But then, Kuznetsov skated along the boards while flapping his arms in the air like a bird, making for a very unique goal celebration. Kuznetsov said he was inspired by playing video games.

"We have to figure out the symptoms of what caused the letdown in the second period. We looked unsure out there for the first time as a team." - Team North America coach Todd McLellan

Team North America forward Dylan Larkin did not play a shift after Tarasenko's goal at 15:43 of the second period. Forward Jonathan Drouin and defenseman Ryan Murray each played three shifts in the third. … Team Russia's power play went 0-for-4 and is 0-for-6 in the tournament, generating five shots on goal on those six power plays. Team North America, on the other hand, went 1-for-7 on the power play Monday and generated a staggering 20 shots on goal. … Every Team North America player had at least one shot on goal except Drouin and Vincent Trocheck. Rielly led the team with seven.

Video: RUS@NAT: Nugent-Hopkins cuts deficit to one with PPG