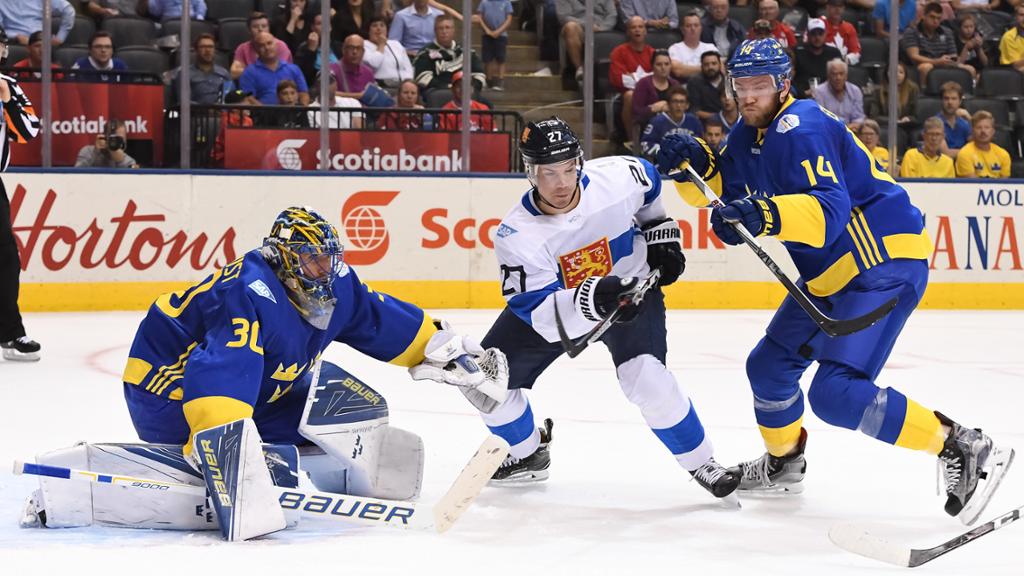 TORONTO -- Team Sweden goaltender Henrik Lundqvist made 36 saves for a 2-0 win against Team Finland in his World Cup of Hockey 2016 debut at Air Canada Centre on Tuesday.

Anton Stralman and Loui Eriksson scored for Team Sweden (2-0-0), which is in excellent position to advance to the semifinals by becoming the first team in Group B with two wins.

"I felt pretty rusty the first period, not as aware as I wanted to be, but I got some really good help with some loose pucks and stuff like that," Lundqvist said. "Then in the second and third I felt more and more comfortable. But it was fun. I really enjoyed being out there playing, a big game, an important game."

Team Sweden could guarantee a Group B spot in the semifinals with a win or an overtime or shootout loss against Team North America on Wednesday (3 p.m. ET; ESPN, SN, TVA Sports). Team Sweden coach Rikard Gronbord would not confirm Lundqvist would start that game, but Lundqvist said he hoped he would.

"I haven't talked to the coach yet, but I want to go," he said. "It's an important game. We're not in yet, but he makes the call."

Team Finland (0-2-0), could be eliminated Wednesday depending on the outcome of the game between Team Sweden and Team North America.

"You have to respect the result," Team Finland coach Lauri Marjamaki said. "We played such a great game, started off well, I thought we had so many good scoring chances, but we didn't score. Of course, the goalie Lundqvist was impressive. But I am so proud of my players, and our team effort was great today. But it is not enough."

Stralman scored at 9:57 of the second period when he drove the net, shook off a check from Joonas Donskoi, and converted a pass from Team Sweden captain Henrik Sedin.

Eriksson scored into an empty net with 2.6 seconds remaining.

Goalie Tuukka Rask started for Team Finland after Pekka Rinne lost its first game of the tournament, 4-1 to Team North America on Sunday. Rask made 27 saves.

During Team Finland's two power plays, the puck was in their offensive zone 67% of the time.

Lundqvist showed early in the game he was recovered from the flu-like symptoms that prevented him from starting the tournament-opening 2-1 win against Team Russia on Sunday.

He stopped a shot by Mikael Granlund from the side boards, and then got across his crease to rob Teuvo Teravainen of a goal off the rebound, at 4:54 of the first period. Lundqvist also made a flashy glove save of a Patrik Laine one-timer on the power play in the final minute of the second period to maintain a 1-0 lead.

"We had many good scoring chances, but he was playing awesome in the net, so we couldn't score," Laine said. "And when you don't score, it's hard to win the game. But we were playing pretty well, I think. But the right team won."

Lundqvist said he did not feel he played poorly in those pretournament games but admitted it felt good mentally to get this result.

"Obviously it's good for your confidence when you play a game like this and you're able to do a lot of good things and help the team," he said. "The important thing is to realize we have another big one [Wednesday], we're not in yet."

Team Finland captain Mikko Koivu had two opportunities to tie the game midway through the third period. First, defenseman Olli Maatta set Koivu up alone in front of the net, but Lundqvist made a point-blank save. Teravainen set up Koivu in front again three minutes later, but his tip attempt went wide.

"We played different tonight than we did in the first one, it's such a short tournament, so you can't have those nights off like we did in the first one," he said. "In a game like this, what can we do different? Score a goal, but it's not always going in. When you keep getting chances, it eventually will, but like I said, it's a short tournament. Now it's kind of hitting us in that way."

Stralman snuck down from the point to drive the front of the net and had Donskoi on his back as Daniel Sedin passed to Henrik Sedin behind the Team Finland net. Henrik Sedin made a little move to give himself some space and slipped a pass under Mikael Granlund's stick to Stralman at the lip of the crease.

"The forward just let me go, so I just saw and opening, and went straight through," Stralman said. "I know what [Sedin] can do with the puck, so just kind of followed through and he made a nice play."

Just before the 11-minute mark of the third period, Maatta moved into the offensive zone from the point as Koivu set up in front of the Team Sweden net. Maatta found his captain with the pass and Koivu got a good shot on goal, but Lundqvist was there to make the save and maintain Team Sweden's 1-0 lead.

Unsung Moment of the Game:

With about two minutes left in the third period, Granlund, Koivu and Sami Vatanen were coming into the Team Sweden zone on an odd-man rush. Just as Vatanen was about to take a one-timer from the slot, Team Sweden forward Carl Hagelin got his stick on the puck and poked it away from Vatanen before sending Eriksson on a breakaway that was stopped by Rask.

At 14:25 of the first period, Laine broke into the Team Sweden zone with speed, pulled a quick move that fooled defenseman Erik Karlsson, and took a quick wrist shot that was labeled for the far top corner. Lundqvist was able to get his arm on it to keep it out, but Laine's move on Karlsson had the crowd buzzing.

"[Markstrom] is a great goaltender, as well, he proved that. He had a flawless game against Russia and [Lundqvist] had a flawless game today against Finland. We have great goaltending, we know that, and obviously that's the backbone of this team right now. It feels good to step out on the ice knowing that if you make a small mistake, it's not going to be the end of the world. You have some pretty good guys behind you." -- Team Sweden defenseman Erik Karlsson

"We knew coming into the tournament he's a top goalie, a piece of the puzzle for us to advance. If we are going to advance in the tournament, he has to be on. He gives a certain kind of stability. As coaches we know we can count on him." -- Team Sweden coach Rikard Gronborg on Henrik Lundqvist

"We have a good future, everybody understands that. I am now so disappointed that I will not say anything." - Team Finland coach Lauri Marjamaki on the potential of its young players

Every skater on Team Finland had at least one shot on goal; Laine had five. … Marjamaki played his third defense pair of Jyrki Jokipakka (10:43) and Ville Pokka (11:27) sparingly. Vatanen played a game-high 26:02, and defense partner Rasmus Ristolainen played 24:52. … Lundqvist made 11 saves in the first period, 12 in the second and 13 in the third.