Team Sweden wakes up just in time to reach semifinals

Trailing early against Team North America, responds to get overtime point it needed 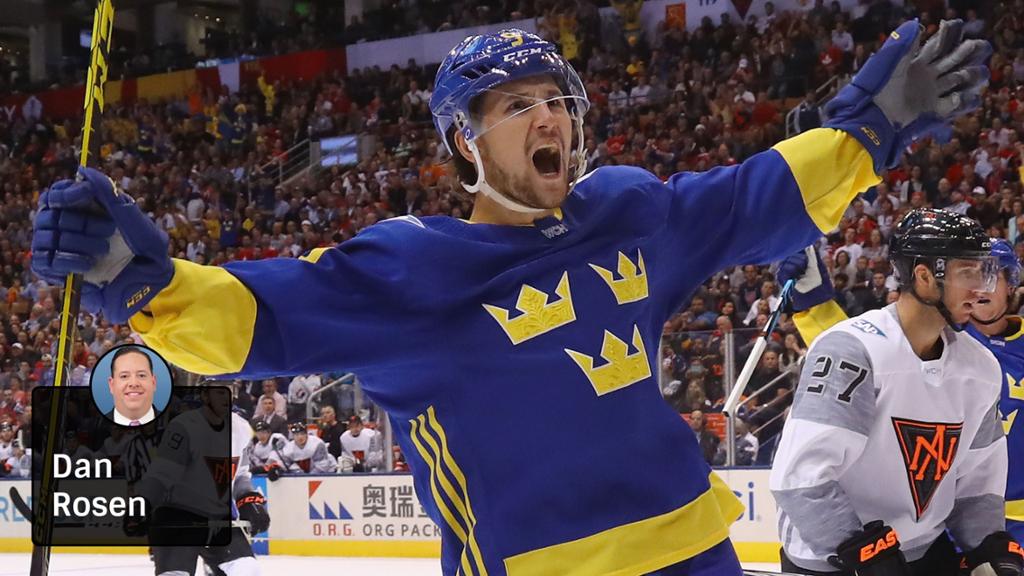 TORONTO -- Nothing had to be said. Everyone on the Team Sweden bench was thinking the same thing.

Staggered and stunned by Team North America's ferocious start that featured two goals and a missed penalty shot in the first 95 seconds at Air Canada Centre on Wednesday, Team Sweden didn't panic. It instead stuck to its identity.

Patient, disciplined, structured, those are the traits that define Team Sweden in the World Cup of Hockey 2016, the traits it leaned on when it was reeling.

Team Sweden rallied in the first period and tied the game in the third before losing 4-3 in overtime, which was enough to win Group B and qualify for the semifinals, where it will play Team Europe on Saturday or Sunday.

"Everybody said it to themselves," Karlsson said. "I know I told myself, 'If I don't wake up here I'm going to let my teammates down.' I feel like every single player on our bench did the same thing. After that, even though they played some good hockey and they had their fair chances, I feel like we took over more and we created our own chances.

"It really evolved us as a team. It didn't start with anyone saying anything to a particular person. I feel like everybody went to themselves and looked themselves in the mirror and told themselves that, 'If I don't do my job here, I'm going to let my teammates down, my team down and my nation down.'"

Team Sweden got the semifinal berth it came for, so the start of the game can be and should be used as a teaching moment.

"It made us realize that we're going to have to play a lot better [in the semifinals] in order to move on to next week," Karlsson said.

He's right, but now Team Sweden has the blueprint for what not to do, and for how to get out of trouble if things go a little haywire: Don't come out flat. Don't give a team built to play fast and fearless freebies at your net.

Connor McDavid's end-to-end rush for Team North America, through all five Team Sweden skaters 20 seconds into the game, set up the opportunity for Auston Matthews to score a rebound goal 10 seconds later.

Johnny Gaudreau's speed led to a breakaway at 56 seconds. Karlsson hooked him from behind to stop him, setting up a penalty shot that, fortunately for Team Sweden and goalie Henrik Lundqvist, never got on net. Gaudreau shot it high and wide.

Shayne Gostisbehere found Vincent Trocheck cutting through the slot uncovered. Trocheck scored with a backhand at 1:35 to make it 2-0.

"Those first two minutes there, that was probably the most embarrassing part that I've ever been a part of on a team," Karlsson said. "They did it all. They had three breakaways, a penalty shot, a penalty called with them against us, two goals in the net. It gave us kind of a slap in the face."

Team Sweden slapped back. Filip Forsberg's goal at 8:24 off a shot from the right circle was huge.

"We got a little energy from that," center Nicklas Backstrom said.

That energy never died even after Gaudreau scored on a breakaway to make it 3-1 at 13:57. That was a golden chance Team Sweden didn't want to give up, but by this point it felt it was playing well enough to feel trailing by two again wasn't insurmountable.

"I thought we became more aggressive," captain Henrik Sedin said. "Even though they scored those goals, for us we know our game plan. We wanted to play them deep in their end, get pucks deep, and we got back to that right away after they scored the third one. It felt like we could own this game and get a lot of chances, so we just kept at it."

Backstrom added substance to that belief with a goal at 16:38 to make it 3-2. Team Sweden had adjusted to the pace of the game and the speed of Team North America.

"We had to, otherwise it was going to be a disaster," Karlsson said. "We had two options: Either we fold and we let them win, or we start over and we realize that we have to step up and evolve our game and accept the challenge that they gave us. That's what we did, and that's why we, at the end of the day, even though we didn't win the game, I feel like we did."

Lundqvist, who could have been angry and beleaguered by the way the game started, stepped up in a massive way. He made 45 saves, including 29 in a row before Nathan MacKinnon scored the overtime winner at 4:10.

"I don't think I can imagine how it feels to be that left alone and let in two quick ones," Karlsson said. "How he can rebound after that I have no idea, you're going to have to ask him. That just shows how mentally strong he is, how much he believes in himself and how much he believes in us. We told ourselves that we [have to] be better, not only for ourselves but for him as well."

They didn't win and it didn't matter. They're in the semifinals and they know they can be better. Even more important, they've learned lessons, they've been tested, and they've passed.

Team Sweden looked like a team without a clue soon after the puck dropped. Now it's a team with a chance to win the whole thing.