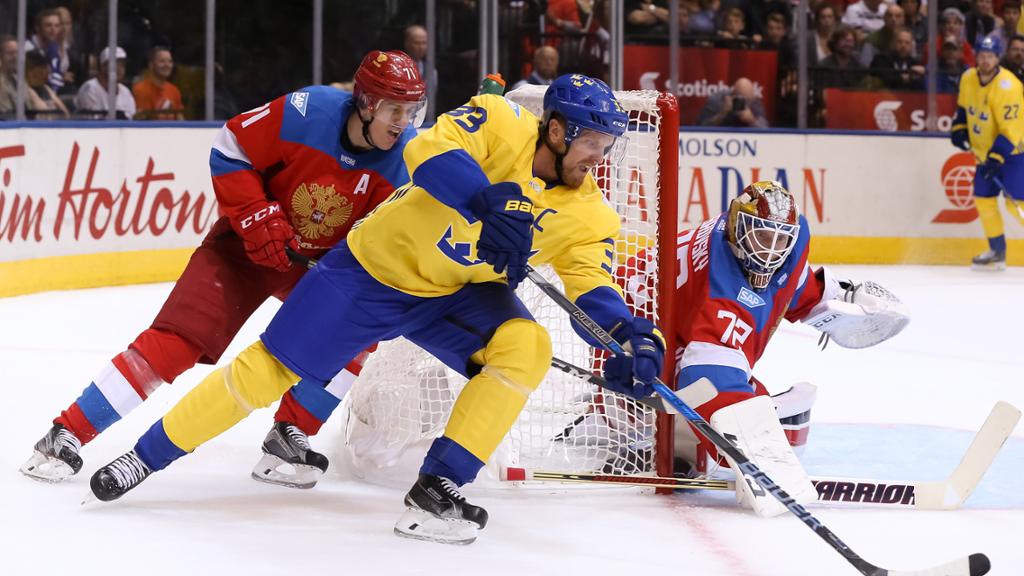 TORONTO -- Team Sweden survived a late comeback attempt from Team Russia and came out on the positive side of a controversial video review for a 2-1 win in the World Cup of Hockey 2016 preliminary round opener for both teams at Air Canada Centre on Sunday.

Team Russia forward Alex Ovechkin thought he had the game-tying goal with 8.2 seconds remaining in the third period, but the officials ruled it no goal because he batted the puck into the net with his hand. Video review confirmed the call on the ice.

"I thought I touched it," Ovechkin said. "To be honest with you I didn't see the replay, but I [felt] the touch. I don't know if it was the puck or the stick. I definitely [felt] the touch on my hand on my stick. It doesn't matter right now. It's over, so we have to forget about it and move forward."

Ovechkin scored on a wrist shot through traffic with 33 seconds remaining in the third period to slice the deficit to 2-1.

Team Sweden goalie Jacob Markstrom started in place of Henrik Lundqvist, who was a late scratch because of an illness. Markstrom made 27 saves and got goals from forward Gabriel Landeskog and defenseman Victor Hedman, who scored 2:11 apart in the second period.

The win ended Team Sweden's 12-year drought against Team Russia in major international tournaments and gave it the early lead in the Group B standings.

Team Russia had the players with the three hardest shots in the game: defensemen Dmitry Orlov and Andrei Markov (95 mph) and forward Alex Ovechkin (94 mph).

Landeskog got on the board first for Team Sweden with a power-play goal off a one-timer from the top of the right circle at 10:41, four seconds into the man-advantage. Right wing Patric Hornqvist was in front of the net, screening Team Russia goalie Sergei Bobrovsky (27 saves).

Hedman scored what turned into the game-winning goal on a one-timer from between the hash marks off of a feed from left wing Carl Hagelin to give Team Sweden a 2-0 lead at 12:52.

Markstrom turned aside eight of nine shots in the third period with Team Russia pressing for the comeback. His best and most important save came with his left pad on Evgeni Malkin's deflection of Ovechkin's shot with more than seven minutes remaining.

Precision on the power play led to Team Sweden taking a 1-0 lead. Center Nicklas Backstrom won the faceoff in the left circle back to defenseman Erik Karlsson, who quickly moved it across to Landeskog for a one-timer from the right circle that rang into the net off of the inside of the left post. Hornqvist was in front screening Bobrovsky.

At the time it looked like a nice save in what was going to be a shutout win, but Markstrom's stop on Malkin's deflection of Ovechkin's shot with 7:23 remaining in the third proved to be a valuable save. Had he not made the save with his left pad, the outcome could have been significantly different for Team Sweden.

Patience at the point closest to Team Sweden's bench from center Henrik Sedin created the opportunity for Hedman to score the game-winning goal. As the puck approached him, Sedin waited to touch it, allowing Team Sweden the chance to complete a line change. Had he touched the puck too soon, it would have been a too many men on the ice penalty. He waited until it was legal and passed it down to Hagelin on the wall. Hedman, who came on the ice in the line change, came streaking down the middle and Hagelin found him, setting up the one-timer from between the hash marks that beat Bobrovsky on the glove side.

Ovechkin thought he had the game-tying goal with 8.2 seconds left in the third period. He didn't. It was called a no goal on the ice because the officials ruled that Ovechkin batted the puck into the net with his hand, a violation of Rule 67.6, which states, "A goal cannot be scored by an attacking player who bats or directs the puck with his hand into the net." Video review confirmed the call on the ice.

"Look at [Team Russia's] lineup, four even lines and all can skate and move the puck, so for us it's all about being physical and being close to them, eliminate them from the puck as much as we could. That was the game plan going in. Skate with them and try and create turnovers. … It feels good to be off to a good start." -- Hedman

"The practices and the little game time that [Markstrom] has gotten I think he's shown everybody that he's ready to step in if something happens. We have a lot of confidence in him. The way he holds himself, even though he wasn't supposed to be the starter, is good so when the news came it didn't really shock anyone. … Marky was ready to go and I think he showed that from the puck drop until the whistle at the end. I think he was our best player out there." -- Karlsson