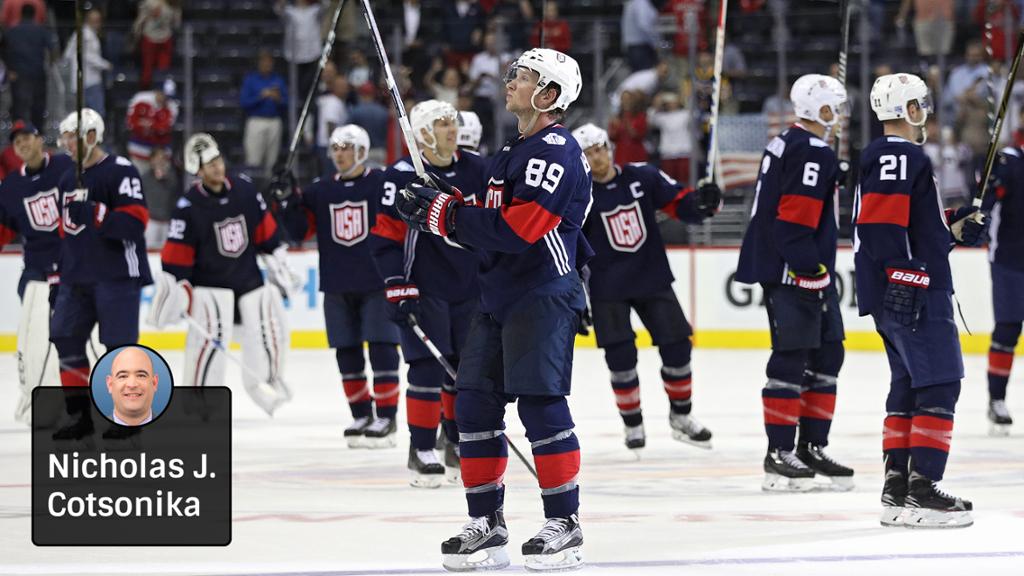 TORONTO -- Now it's getting real.

After five days of practice and three pretournament games in three cities, Team USA arrived in Toronto on Wednesday for the World Cup of Hockey 2016.

The bus didn't pull up to the hotel until shortly before 3 a.m. ET; so coach John Tortorella canceled practice and gave the players the day off to recharge. That means they have two more days of practice before their first of three preliminary-round games.

"These tournaments are special," Team USA captain Joe Pavelski said Wednesday. "The Olympics are special. This World Cup, all the players are excited to be in it, and we're excited that the tournament's starting now."

Video: FIN@USA: Oshie lights the lamp early in the 1st

Some things became immediately clear. Team USA will be the physical, hard-to-play-against group it was built to be, and Jonathan Quick will enter the tournament as the No. 1 goaltender.

"You get thrown right into the fire, but everyone's in that same boat and everyone wants to earn a little extra ice time or try to get up to speed as fast as they can to gain as much confidence as they can," Pavelski said. "I think that's where you saw the compete out there. It was just trying to get up to speed and get as much out of that first game and second game as you could."

Quick, who has won the Stanley Cup twice and the Conn Smythe Trophy as the most valuable player in the playoffs with the Los Angeles Kings in 2012, started for the United States at the 2014 Sochi Olympics and had a 2.17 goals-against average and .923 save percentage.

He gave up one goal on 33 shots in two periods in the first pretournament game against Team Canada and two on 32 shots against Team Finland, giving him a 1.80 goals-against average and .954 save percentage over 100 minutes.

"It's pretty cool to have him on your side and see his game elevate," said Pavelski, who as a member of the San Jose Sharks has played against Quick often. "That's the biggest thing with him. You know the compete level is at an all-time high.

"And you saw it right away in that first game, that first exhibition game against Canada. He was zoned-in, and he was ready. That's the goalie that we feel that shows up in those games, and we're excited to have him here."

Some things still need work, however, such as the power play. Team USA went 1-for-11 during the three pretournament games.

"We've had some power plays where we've moved it around good," Pavelski said. "It's still about the finish. All power plays are. You're going to get your couple looks, and you've got to find that finish.

"So early on, whether you're a little rusty or not, it's going to be time that we start having a little bit of polish to that power play and getting a few more shots and retrieving pucks and just getting that second, third opportunity to score."

Remember: These players usually are preparing for training camp at this time of year, not hopping right into top-level competition, and they are adjusting to new teammates. The idea is to improve as the tournament progresses.

"You can't really say there's one part of your game that's dialed in right now or not," Pavelski said. "The conditioning can still improve, and it will. It's gotten a lot better from the first day of camp to now. You can feel it.

"That third game ... It was being able to go through the routine a couple times and have couple days to think about it. It was nice to get back in there and really start feeling like you're getting closer to regular-season form, shooting pucks, just playing in traffic.

"I think that's one thing that's always big, just the body contact. Whether it's in the corner or just trying to finish a hit or protect the puck, that's an area that will always improve and comes with time."