Team USA has no answers at World Cup 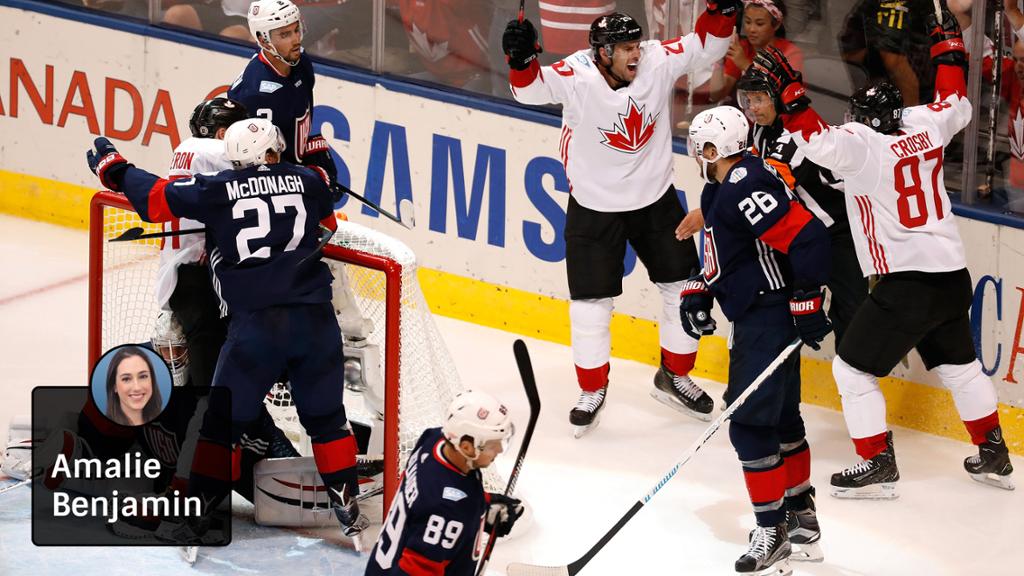 TORONTO -- The words seem so naive now, so surprisingly off. It was five days earlier when Team USA players crowded podiums in the media room at Air Canada Centre, airing a message that would turn out to be so very, very wrong.

"For me personally, just kind of being through the whole 2010 Olympics and 2014 and coming up short there, we know that, hey, it's time right now to get the job done," Patrick Kane said last Thursday.

It should have been time. But it wasn't and so, after losing to Team Europe and Team Canada in the first two games of the preliminary round of the World Cup of Hockey 2016, it is officially the end for Team USA. It will not advance to the semifinals.

The time has run out.

"There's a lot of disappointment," Team USA captain Joe Pavelski said after a 4-2 loss on Tuesday. "You just want so much better for each other and you want to step up and play better and just add more to the game. We were never able to do that. We had the opportunities, and it just didn't happen.

"It's always tough because you know how much guys care and want it. These tournaments, the cool thing about them is they're way bigger than just the team. … You'd like to give definitely better for everyone."

So far, Team USA has zero points, tied with Team Finland for fewest in this tournament. Team USA first lost to Team Europe, which had no support from national federations, which was a makeshift composite group that came together in a scant two weeks with players from eight different nations. And then it fell to Team Canada on Tuesday, a group it was specifically constructed to defeat, in a game that demonstrated exactly how far Team USA has to go.

They had "a lot to prove," as forward Max Pacioretty had said at the start of the tournament. They proved nothing, or at least nothing good.

"I think we're all disappointed," defenseman Ryan Suter said. "I feel like we let our country down. We let ourselves down. It's just disappointing. You come into this not knowing how many more chances you're going to get and to be out after two games is extremely disappointing."

When he came off the podium after the game, Suter apologized to the assembled media. It was unclear what exactly he was apologizing for, for his inability to articulate exactly what went wrong, to explain away the crush of the defeat, for the actual results and for how sideways it went for Team USA.

It didn't matter. He was sorry.

There's no knowing quite yet what this team will look like when it's put together next, whether the coaching will change or the management or the players, whether the identity will be altered in the future. It seems likely that things need to be different, that time is up on this group.

"To come so close in Vancouver, to beat Canada early in the tournament, and then lose to Canada in overtime in the 2010 Olympics, and then to go to Sochi and play, it wasn't really the style that we wanted to play, so that was disappointing," Suter said. "We had a chance to win a bronze medal there, and we didn't. And then to come here, and flop like we did is extremely disappointing. That's not up to me to decide [what happens]. Obviously we have to examine ourselves, and what more could we have done, and how can we get better for future tournaments, and playing for our NHL teams."

Video: CAN@USA: Duchene slides one five-hole on Quick in 1st

On Tuesday, they were outclassed and outplayed by Team Canada, after oh-so-briefly taking the lead in the first period. They held that lead for less than a minute and a half, 89 seconds to be exact, before two goals in 14 seconds by Team Canada put the locals on top to stay.

Team USA had no answers after that. No answers and no offense, which was the bigger problem. Through two games and two losses, Team USA has scored two goals. That's it. Two. Whoever was on the roster, and it can be argued that it was not the country's best offensive players, they did not score enough. They did not do enough. And so, while the time was now, it also wasn't.

"It's tough right now, for sure. You've got two years to sit on this one," Kane said, referencing the possibility of playing at the Olympics in 2018. "And when that time comes, hopefully you're there giving the best for your country."

And so, it made sense that, with 4:50 left in the third period, the Air Canada Centre crowd serenaded Team USA with the song that signaled its elimination from the next round of the tournament, with "Na na na na … hey hey hey … Goodbye."

Goodbye, Team USA. It was time for it to do something, to prove itself.

But those words, uttered at the start of the tournament, turned out to be the best production Team USA had in Toronto. The quotes were good.

The results, well, the results were anything but.