Team USA has to save itself

Roster won't change now, but performance must against Team Canada 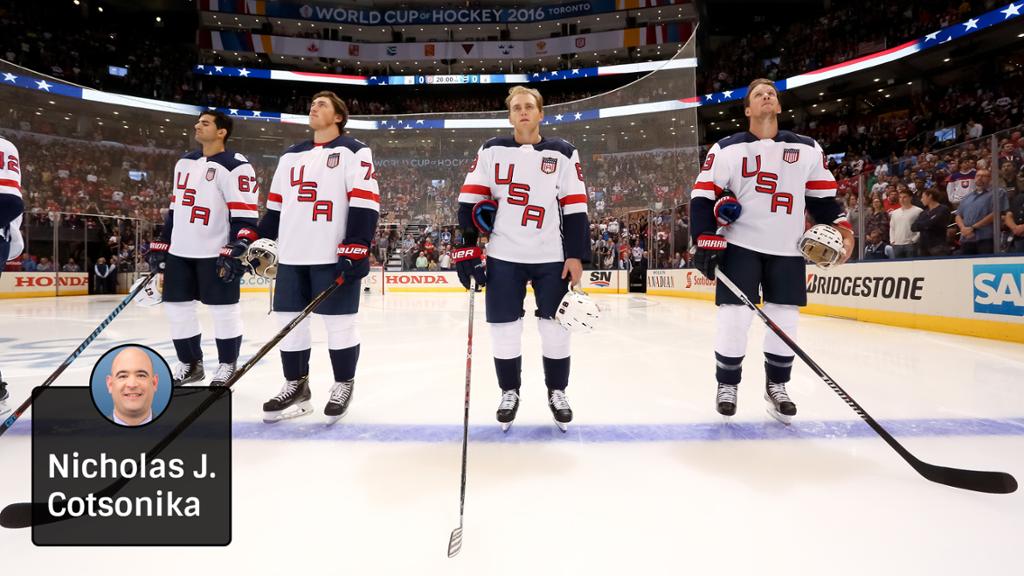 TORONTO -- We have criticized the roster for months. If Team USA fails in the World Cup of Hockey 2016, especially if it bows out meekly in the preliminary round as it is already in danger of doing, we can second-guess the roster forever after.

But Phil Kessel couldn't have come even if Team USA had wanted him to thanks to a hand injury. Tyler Johnson and Kevin Shattenkirk and Justin Faulk and whoever else we think should be here aren't here, and it's too late to change that.

Team USA has to play with what it has. It lost to Team Europe 3-0 while Team Canada defeated Team Czech Republic 6-0 on Saturday, and now it has to defeat Team Canada on Tuesday (8 p.m. ET; ESPN, SN, TVA Sports) or its World Cup could be all but over.

It has to find a way to generate offense when it hasn't scored in three straight best-on-best games dating back to the 2014 Sochi Olympics and Canada hasn't allowed a goal in three straight. Team USA has to play with the identity it was supposed to have.

If management is going to build a gritty roster and the coach is going to talk about north-south hockey, then the players have to play with grit and go north-south. They have to move the puck up the ice, get in on the forecheck and get to the net.

Otherwise, what was the point?

"We knew we'd have to go through Canada," coach John Tortorella said after practice at Ricoh Coliseum on Sunday. "That game has just come earlier for us here right now, and that's the way we're approaching it. That is our championship game. If we are fortunate enough to get through, hopefully we can get another one."

The loss to Team Europe, comprised of Europeans from outside the Czech Republic, Finland, Russia and Sweden, was a major disappointment.

But what about the way the players in the lineup performed? Players who are supposed to be leaders like defenseman Ryan McDonagh and forward Patrick Kane, who made mistakes that led to odd-man rushes. Team USA fell behind and fell into Team Europe's hands.

Though Team USA had the puck a lot, it stayed to the outside while Team Europe sat back and collapsed in front. The defensemen didn't move the puck up the ice quickly enough, and the forwards didn't get it with speed. When the puck did get in deep, the second man wasn't there to establish the forecheck. When the puck did get to the net, forwards weren't there for tips and rebounds.

"The thing that's frustrating to me is just so many next plays didn't happen, and I think we have enough good people, enough talent on that crew, to make that next play so we can generate more offense," Tortorella said.

Team USA does have enough talent to play better than that, even considering the players who were left off the roster and out of the lineup.

Against Team Europe, Team USA dressed Kane, the reigning winner of the Art Ross Trophy as the NHL scoring champion and the Hart Trophy as the League's most valuable player. It dressed two others who finished in the top eight in scoring in the NHL last season: Joe Pavelski and Blake Wheeler. It dressed nine forwards who scored at least 21 goals in the NHL last season.

There was enough skill amid that grit to score some goals.

Tortorella shuffled his lines and power-play units at practice Sunday. You could argue he has been overshuffling considering the need to build chemistry and the short timeframe of this tournament, and you have to wonder about some of the combinations. Kane with Derek Stepan and Justin Abdelkader? But it's a chicken-or-the-egg question: Is Team USA not clicking because of the shuffling or shuffling because it's not clicking?

"A lot of times chemistry for guys, especially of this caliber, can kind of just click right away," forward T.J. Oshie said. "We're trying some different combinations out there, and hopefully this one will stick."

At least Palmieri was on the point on the first power-play unit with Byfuglien on the second. At least Pavelski was roaming the slot on the first unit too. He's the best in the NHL at tipping pucks, and he wasn't in position to do it in the left circle against Team Europe.

The power play has to get going. It went 1-for-11 in three pretournament games and 0-for-4 against Team Europe. Team Canada gave Team Czech Republic six power plays Saturday.

At 5-on-5, Team USA isn't going to defeat Team Canada with pretty passing plays. It probably wouldn't have been able to even if it had brought the 23 most skilled Americans available. That was the point of this approach.

Team Canada's defensemen keep tight gaps. Team Canada's forwards backcheck hard from captain Sidney Crosby on down. Team Canada's goaltender, Carey Price, makes all the easy saves. So Team USA has to get the puck behind the defense, get it to the net and get dirty goals.

"I don't think we're going to get much by playing in front of them, especially early on in the game," forward Max Pacioretty said. "We really have to make life difficult for both the defensemen and the goalie, and that's by keeping it simple."

"Either you're afraid of it, or it's just a fantastic opportunity we have in front of us Tuesday," Tortorella said. "I have the belief in our guys they're going to relish this opportunity, and that's the way we have to approach this."