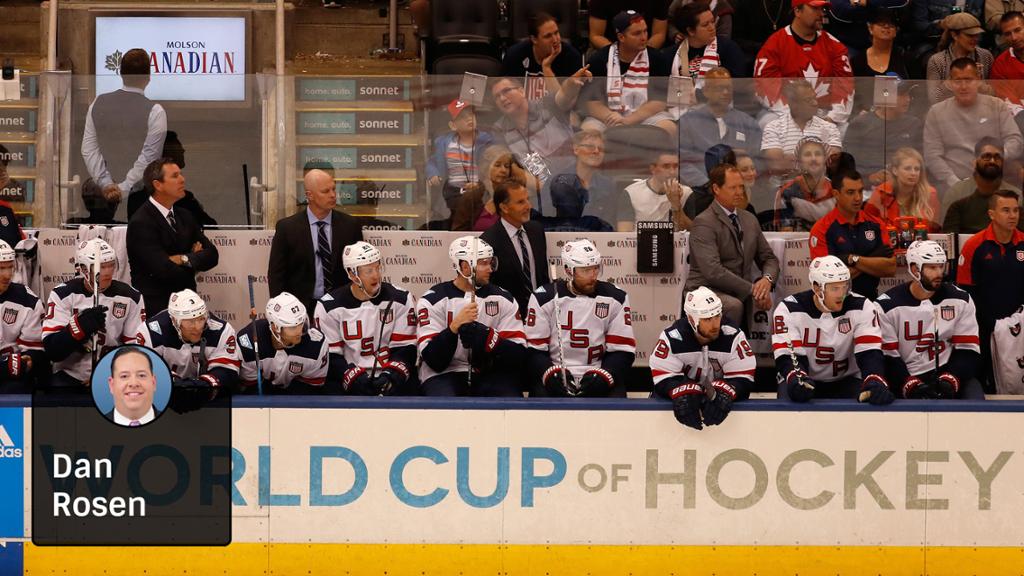 TORONTO -- Team USA's "It's time" motto originally referred to these players finally winning something big, finally cementing their legacies with the next great signature moment in USA Hockey history.

One game into the World Cup of Hockey 2016, "It's time" has taken on a completely different connotation.

In all of Team USA's preparations for the tournament, you wonder if coach John Tortorella and general manager Dean Lombardi put a disaster relief plan in place, because they need it after losing 3-0 to Team Europe in the tournament opener at Air Canada Centre on Saturday.

Team USA's stunning loss essentially means it has zero room for error in the rest of the preliminary round. It still has to play Team Canada on Tuesday and Team Czech Republic on Thursday. Team USA is at significant risk of not making it into the semifinals.

"There's always pressure, but it's a must-win for us," center Derek Stepan said about the game against Team Canada. "Maybe it's a good thing we got our backs against the wall and got a little adversity. We have to up our level and up our game."

The worst part about Team USA's loss was basically nothing went right from the start.

A bad pinch by defenseman Ryan McDonagh led to a 2-on-1 that Team Europe forward Marian Gaborik finished off for a 1-0 lead at 4:19 of the first period.

Compounding the problem was a brutal turnover by forward Patrick Kane that led to a 2-on-0 goal for Team Europe center Leon Draisaitl at 4:02 of the second period. Kane was curling at the top of the zone, lost the puck and away went Draisaitl and Nino Niederreiter on the 2-on-0.

"I'll definitely take the fault on that one," Kane said. "That's a play that I've made a million times in my career. Just kind of lost the puck, and the next thing you know they go down 2-on-0. That's unacceptable from me."

Even when Team USA thought it had a goal, it didn't.

Stepan's would-be power-play goal at 14:10 of the second period was waved off upon video review because it was ruled that forward James van Riemsdyk deliberately directed the puck toward the net with his body, a violation of Rule 78.5, according to the NHL Situation Room.

That the puck hit Stepan before going into the net was irrelevant because Rule 67.6 dictates that a "goal cannot be scored by an attacking player who bats or directs the puck and it is deflected into the net off any player, goalie or official."

"It kind of felt like a little momentum was coming and it got taken away," captain Joe Pavelski said. "We stayed on it from there, but we've gotta get more out of it."

It didn't, because scoring chances were incredibly difficult to come across in the first two periods. Team USA didn't start generating good looks until Team Europe had built a 3-0 lead on forward Pierre-Edouard Bellemare's deflection goal at 18:32 of the second.

Even then, though, hopes for an early comeback in the third period were put on hold when center Brandon Dubinsky was forced to spend four minutes in the penalty box because of a high sticking double minor on Team Europe defenseman Zdeno Chara at 2:22.

Team USA had 17 shots on goal in the third period, including eight over two power plays in the final 10 minutes, but there weren't many that challenged Team Europe goalie Jaroslav Halak (35 saves).

"We just couldn't create better scoring chances," Tortorella said. "I thought for really a good part of the game we had the puck quite a bit, but we just couldn't develop those good scoring chances. So we'll look at the tape, we'll see who we have as far as people playing with one another. We're still trying to find those combinations. We have a couple days here, we'll go to work and we'll see what happens Tuesday."

Tortorella mentioned that part of the blame for Team USA's struggles should turn into credit for Team Europe and the way it defended. But part of the problem there is Team USA is built to be abrasive and to play with a lead; it's not built to generate comebacks from multi-goal deficits against teams that pack the zone the way Team Europe did after it built a lead.

Team Europe collapsed all five guys in the zone when Team USA had the puck, limiting the latter's chances of getting to the net to generate second and third opportunities.

"We've got to get there," Pavelski said. "On the power play, you could tell he wasn't even seeing it, it was hitting him. We've got to find a way to break through, stick together. We'll get this done together, I think."

Team USA doesn't have time to come together, though. No team does in this tournament. Each team gets three games in the preliminary round, and the top two finishers in each four-team group moves on to the semifinals; the others go to their respective NHL training camps.

Team USA is one step closer to training camp, to NHL preseason games. It could get there quickly if it doesn't defeat Team Canada -- "the big dog," according to Stepan -- on Tuesday. By the way it played Saturday, it's time to question and wonder if that's actually realistic.

"We don't really have much of a choice now," Parise said.