Team USA has plenty to think about after elimination 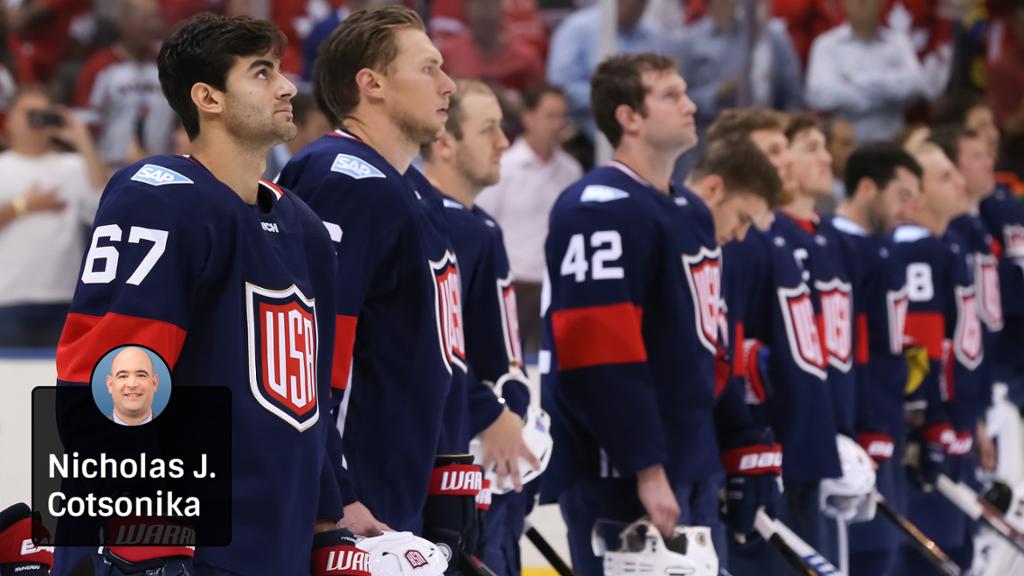 TORONTO -- It didn't work. Team USA came to the World Cup of Hockey 2016 planning to win with grit. It was eliminated after losing its first two preliminary-round games by a combined score of 7-2.

But the players aren't ready to concede the roster and the style were the problem. They felt they had enough talent to win and the problem was that they didn't play the way they set out to play.

Their most critical mistake: overlooking Team Europe in their opener, a 3-0 loss. That put them in a must-win situation against Team Canada. When they lost 4-2, that left them where they are now, answering hard questions and facing a playing-for-pride finale against Team Czech Republic on Thursday (8 p.m. ET; ESPN2, SN, TVA Sports).

"The thing that still stings is the regret, is the way we come out against the European team and don't give an honest effort necessarily and we don't give ourselves a chance to win that game," forward David Backes said. "We put ourselves behind the eight ball."

Video: Team USA speaks to the media after 4-2 loss to Canada

Before the tournament began, critics said Team USA general manager Dean Lombardi was wrong when he selected players like forwards Justin Abdelkader, Brandon Dubinsky and defenseman Jack Johnson rather than more skilled players who were available. The players still don't buy that despite the results.

"I thought we had the assets to do better than we did," Zach Parise said.

Backes pointed out how critics gave the United States little chance to win when it brought a gritty roster to the last best-on-best tournament on NHL-sized ice: the 2010 Vancouver Olympics. The United States went 3-0-0 in group play, including a 5-3 victory against Canada, and took Canada to overtime of the gold-medal game, losing on Sidney Crosby's golden goal.

"Whoever books the flights for the Olympics had my flight going home from Vancouver after the preliminary round, and that [ticked] me off," Backes said. "So people were naysaying there, but that team stuck together."

Backes said Team USA needed that to win this tournament.

As it turned out, they didn't out-grit anybody either.

"I don't think we committed to that style of game, of getting pucks in every time, not turning pucks over in the neutral zone and tilting the ice and making the opposing team come 200 feet to score goals," Backes said. "I think if we get to that game. … And maybe it's September and guys aren't in that mode yet. I don't know. But the way that we could play if we used our size and played the averages in our favor, I think … it wouldn't. … We're not going to give up four goals playing that way. It's probably a one-goal game after one-goal game, but you're giving yourself a chance every game."

"I think the equation coming in is, 'Hey, let's beat the European team, let's beat the Czechs, and whatever happens against the Canadians is going to figure out who's a one seed and who's a two seed,'" Backes said. "Maybe we got ahead of ourselves and thought that was a foregone conclusion, but yeah, that's the thing I think everyone in the room is still shaking their heads about."

Video: CAN@USA: Duchene slides one five-hole on Quick in 1st

How does that happen? Because Team Europe was a new creation of the NHL and the NHL Players' Association, comprised of Europeans from outside the Czech Republic, Finland, Russia and Sweden, in an effort to include more of the best players and strengthen the field? Because Team USA didn't know quite what it was in for?

"The fact of the matter is, you had 20 players wearing red, white and blue against 20 players that are from European countries other than the teams that are in this tournament, and we just needed to beat those 20 guys," Backes said. "It's up to the guys on the ice. We had a game plan, and all the work has been done from the management and the coaching staff, and we just weren't near good enough in order to beat that team."

Backes said Team USA gave an honest effort in the Team Canada game, but it wasn't enough and it's too late.

"It was a game where you hit a couple posts, they get some bounces," Backes said. "Those games are going to happen against good teams. They probably made their luck and we didn't make enough of our own luck. … We just showed too many cracks too frequently and they exposed them. …