Second-period deflection against Team Europe taken off board 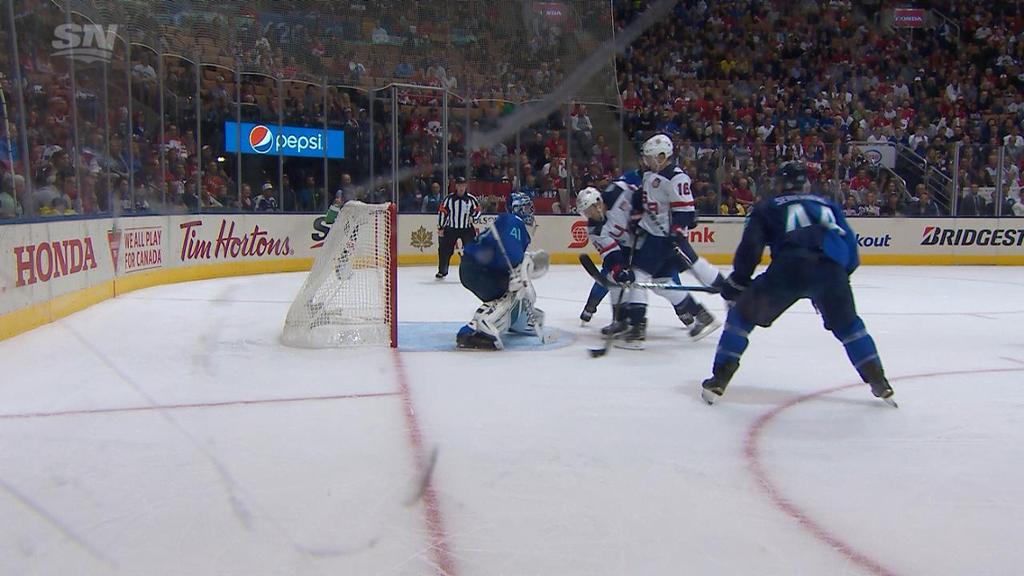 James van Riemsdyk deflects a goal into the net off his body, and after a review, it is determined the puck was illegally deflected in

TORONTO -- It was called a goal on the ice. Team USA players and coach John Tortorella thought it was a good one, too, for center Derek Stepan in the second period, even throughout the video review process.

They were wrong. They never got it back, either, in what became a 3-0 loss to Team Europe in the first game of the World Cup of Hockey 2016 at Air Canada Centre on Saturday.

"I think it's a goal," Tortorella said.

It wasn't, because the puck initially hit forward James van Riemsdyk, and after video review it was determined that he deliberately directed the puck into the net with his body, a violation of Rule 78.5, according to the NHL Situation Room.

The puck did hit Stepan on its way into the net, but that is irrelevant because of Rule 67.6, which dictates that a "goal cannot be scored by an attacking player who bats or directs the puck and it is deflected into the net off any player, goalie or official."

So instead of making it 2-1 at 14:10 of the second period, Team Europe kept its two-goal lead and built on it 4:22 later with a deflection goal from Pierre-Edouard Bellemare.

Van Riemsdyk disagreed with the decision from the NHL Situation Room.

"It was more of a reactionary thing where the puck kind of hit me, and it startled me," he said. "I didn't think I necessarily tried to direct it toward the net deliberately. It's kind of one of those gray areas. On the ice they called it a goal, so I don't know how they could have possibly seen enough to overturn it, but that's just how the game goes sometimes."

Van Riemsdyk said he believes, regardless of the rule, goals like that should never be taken off the board.

"We're trying to get more goals in the game," he said. "Those types of things should count."