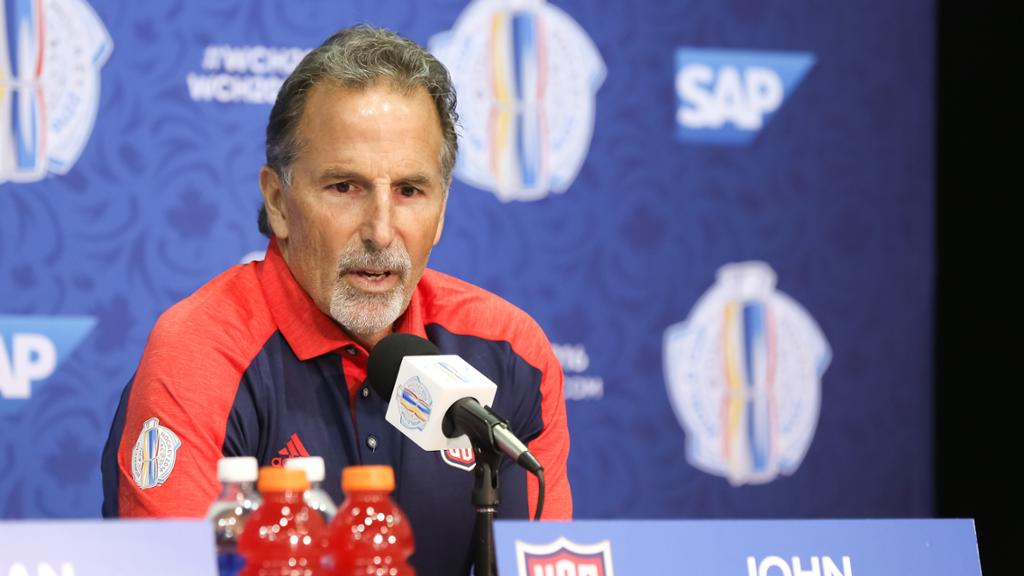 TORONTO -- It's a no-win situation, but it might help Team USA win games in the World Cup of Hockey 2016 and the coaches grow within their profession.

Coach John Tortorella is from Boston. Except for Phil Housley of South St. Paul, Minn., the rest of the assistants are from New England. Jack Capuano is from Cranston, R.I.; Scott Gordon from Easton, Mass.; John Hynes from Warwick, R.I.; and Mike Sullivan from Duxbury, Mass.

"Just the way we like it," Tortorella said with a smile at media day Thursday.

When these alpha males get together to talk hockey, they have strong opinions about everything involved in the tournament. Team USA opens against Team Europe on Saturday (3:30 p.m. ET; ESPN2, SN, TVA Sports).

Video: Torts explains what will lead to Team USA victory

But no one loses it, either. The coaches have listened to the others' ideas and put their egos aside.

"The biggest thing that has been fun for me is that I think we have kind of joined together in a short time here," Tortorella said. "There's no trying to one-up one another.

"It's hard conversations when we're talking, and we all have our convictions. But at the end of the day, what's best for our team is, we believe in what we bring to the team, and we sell it that way. Bright minds. Bright minds here."

Tortorella said he has been having a blast, but he has no interest in doing it over an NHL season.

"This many coaches?" Tortorella said. "Man, I'm not sure if I could have those hard conversations all year long for seven months. I don't know. No. No. I don't want to go that far, saying being with these guys eight months out of the year. Not a chance."

Kings of the World Cup? Team Canada defenseman Drew Doughty said he was not surprised when Team USA general manager Dean Lombardi built a gritty roster. Doughty won the Stanley Cup twice as a member of the Los Angeles Kings, a team put together by GM Lombardi.

"He built us to be a hard-hitting team [that would do] anything it took to win, relentless, blocking shots, whatever it was," Doughty said. "It worked for us at that time, and I think compared to the U.S. teams I've played in the past, it kind of worked for them the first two exhibition games."

Doughty was part of the Canada teams that defeated the United States in the gold-medal game at the 2010 Vancouver Olympics and the semifinal at the 2014 Sochi Olympics. Team USA defeated Team Canada 4-2 in the first pretournament game in Columbus on Friday, but Team Canada defeated Team USA 5-2 in Ottawa the next night.

Is a gritty style the way for Team USA to beat Team Canada?

"I don't know," Doughty said. "That's a tough one. I don't even know how other teams can beat us. I don't know what the thing is to do to beat us. All we really worry about is what we need to do to beat them, and that's just playing our game and obviously studying them and knowing what they're going to do. The U.S. is a good team. There's no doubt about it."

Avoid a track meet: Team USA wants to be hard to play against, but that goes beyond hitting. Among the keys will be exiting the defensive zone efficiently and using the forecheck to sustain pressure in the offensive end.

Video: FIN@USA: Laine shows off speed, but Quick denies him

"I'm a believer that not every breakout is going to be perfect, but if you can get as many clean ones as possible, that's going to only benefit your team," defenseman Matt Niskanen said. "On the opposite end is forechecking.

"I think our team is built on forechecking pressure and going after teams, not only physically but getting the puck stopped and spending time in the offensive zone so we're not in a track meet up and down the ice. I don't think our team's built that way."

These colors don't run: Lombardi and Tortorella have appealed to patriotism often. Tortorella had a member of the Army speak to the team at training camp and stand behind the bench for the first pretournament game. The team visited a Marine Corps base in Virginia before the third game.

"This is really something that touches upon that," Lombardi said. "It means a heck of a lot to me, those colors, in so many more ways than hockey. This is just a very small fraction of that. But I guess I could go on forever about how much pride I have in these colors. Hopefully we can give something back in a small way."