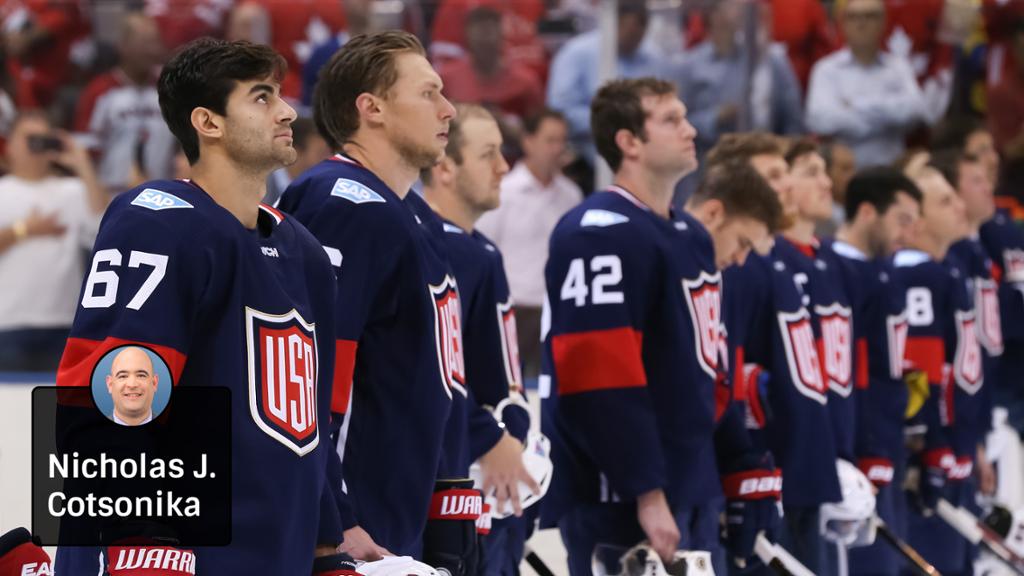 TORONTO -- Let's describe what happened through the eyes of Team USA general manager Dean Lombardi, who spoke publicly Thursday for the first time since Team USA was eliminated from the World Cup of Hockey 2016, and let's break it down.

So what did Team USA have to do to win the tournament? Lombardi felt if it made the best-of-3 final, it most likely would have to defeat Team Canada.

So what did Team USA have to do to defeat Team Canada? Lombardi looked at Team Canada and saw seven No. 1 centers, five Norris Trophy candidates on defense and a goaltender who could match up against any other. Then he looked at the pool of players from which he had to choose and concluded that even if he took the most skilled roster possible, Team USA did not have a good chance to win.

"We got some darn good players," Lombardi said. "But the reality is, that matchup on a skill basis, if you want to go head-to-head and play a skill game, your odds of winning that game when you look at those matchups [are] not very good."

Video: Team USA speaks to the media after 4-2 loss to Canada

So what to do? Lombardi believes that emotion, competitiveness and caring can close the talent gap in hockey more than in any other sport. It helped him win the Stanley Cup twice as GM of the Los Angeles Kings.

"That is why I think it is the greatest game in the world," Lombardi said. "There is no doubt in my mind the formula has worked. We have won two Stanley Cups. First thing, yes, we had talent. No question about it. But the reason we won: We were a frickin' team, and that was a culture."

So why did Team USA lose to Team Europe 3-0 and Team Canada 4-2, finished after only four days and two games, playing for pride against Team Czech Republic on Thursday (8 p.m. ET; ESPN2, SN, TVA Sports)?

To Lombardi, the problem wasn't the philosophy. It wasn't the roster. It wasn't that the players didn't care. It was a combination of the short tournament, reading too much into pretournament games, failing to respect Team Europe and these players not performing their best.

Is it possible to build the culture Lombardi wanted with only a few days of practice and three pretournament games? Lombardi sounded as if he were still working through that in his analysis.

"I guess I do think it is," Lombardi said. "I haven't really answered that, but that is one of the things I put down on paper. Is that really feasible in essentially a four-day period? I beat myself up more than anybody possibly can."

Team USA won its first pretournament game against Team Canada, 4-2, lost its second to Team Canada 5-2 and won 3-2 in its third game against Team Finland. Tortorella started shuffling his forward lines, defensive pairings and special-teams units based on what he was seeing, then kept doing it during the tournament.

At this point in the year, these players are usually preparing for NHL training camp, not jumping right into high-level competition. Perhaps Tortorella should have understood they were finding their legs, stuck with the plan and let them build chemistry unless someone clearly showed he was out of shape.

"I think we might have approached that part differently," Lombardi said.

Forward Patrick Kane said Team USA wasn't ready to play against Team Europe, a team of Europeans from outside the Czech Republic, Finland, Russia and Sweden. Forward David Backes said the players got ahead of themselves, thinking they would defeat Team Europe and Team Czech Republic, and the Team Canada game would be for seeding.

"I don't think we showed enough respect for the talent on that team," he said.

"I don't think our team overlooked Europe," Tortorella said. "Certainly going into the tournament, you have to look at Canada as being the team to beat. But the way we prepared, the way we talked, there had been a number of meetings prior to Europe [discussing] how important that first game is."

But whether Team USA overlooked Team Europe or not, the loss gave Team USA no margin for error against Team Canada.

"I've been down, have been on a team that was down 3-0 in a Stanley Cup series, and that is the proverbial eight-ball," said Lombardi, whose Kings rallied from a 3-0 deficit to defeat the San Jose Sharks in the Western Conference First Round of the 2014 Stanley Cup Playoffs and went on to win the Cup. "Well, this felt like a boulder. It was just really strange. It's like, 'How can this happen so quickly to where your back is against the wall after one poor game?'"

Another loss, and it was over. There was no chance for recovery or redemption.

"I told them I wish I had this group for a longer period of time, because I know we could have built that culture," Lombardi said. "But it didn't happen."

Look, Lombardi is a smart, accomplished hockey executive. He has been second-guessed before and turned out to be right. Remember when he brought Darryl Sutter off the farm to coach the Kings? What did people say then? How did that turn out?

Lombardi is right. Had Team USA brought its most skilled roster, it would have been an underdog to Team Canada. This is not 1996, when the U.S. was stacked with stars and upset Canada to win the World Cup, and this is not 2018, when the United States could have Auston Matthews, Jack Eichel, Johnny Gaudreau and Shayne Gostisbehere, each with two more years of experience (if NHL players participate in the Winter Olympics).

"We're not as deep as Canada skill-wise," Tortorella said. "Not sure USA Hockey will like me saying that, but it's the truth. It's a situation where I still think, in our mind, we could not just skill our way through Canada."

Lombardi is right. This roster could have performed better as constructed. This team had three of the NHL's top eight scorers last season and 10 players who scored more than 20 goals. This team should not have been outscored 7-2 in two games.

At least it should not have lost to Team Europe 3-0. It did not play as well as it could have. Leaders like Kane and Ryan McDonagh turned over the puck, leading to odd-man rushes and goals against. Team USA stayed on the outside and did not play the style it set out to play.

"I'm not going to sit here and let people tell me this team was a bunch of grinders, because it's not true," Tortorella said. "We just did not, from the staff right on through, get the job done. You need to accept that, and we need to take the medicine."

"I need to take responsibility there," Tortorella said. "I don't think I found the right mix quick enough for our club."

Lombardi is right. The short tournament is unforgiving. We're judging a lot on a little.

But this is a best-on-best tournament, not the NHL season. What works here is not necessarily what works in the NHL, especially when you're facing a Team Europe instead of a weaker national team. The pace is faster and the teams are deeper. In this case, a gap in skill was not closed by grit. It was exposed.

Bottom line: Team USA tried to win the tournament, and it ended up as one of the worst teams in the tournament. To defeat Team Canada in the best-of-3 final, or anyone else for that matter, you have to get there first.